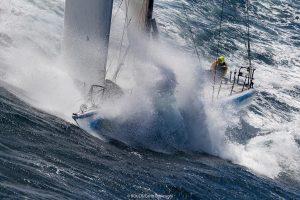 The (well-kept secret) of the RWYC in Plymouth UK starts the 2 handed Round Britain and Ireland race this Sunday. Pegasus of Northumberland, (ex Artforms, ex Pegasus) the Owen Clarke Open 50 starts as one of the favorites.

She is co-skippered by Adrian Banks and Ross Hobson, Ross is an old hand at this having won the RB&I and TJV previously, BUT his co-skipper Adrian (Banksy as he is known in UK sailing circles) is facing the massive challenge with a diagnosis of Parkinson’s disease. This makes the brutal race even harder!

Banksy has been training on and offshore to be as physically fit as possible working with leading UK Parkinson’s researchers to explore how physical fitness can reduce symptoms and delay progress and onset.