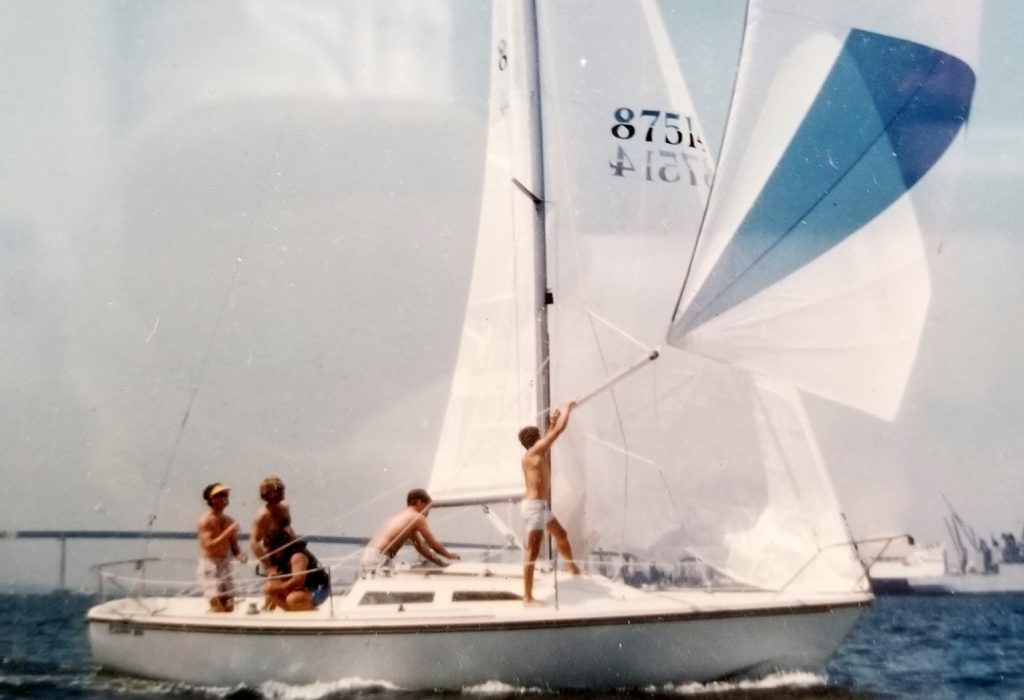 Way back in the day I somehow convinced the late, great Frank Butler of Catalina Yachts fame to give me a Capri 25 that Doug Peterson would modify to make it as fast as possible for San Diego. A tall, double spreader Forespar rig was built, Carl Eichenlaub made the keel and rudder deeper, and Sobstad made a set of really nice sails (I was slingin’ sails for them back then). It actually worked, and the thing was a light air rocket. We won a lot of stuff, then the boat got sold to make way for the new MORC-oriented Capri 25 MK 2, Tuna Surprise that we sailed to mixed results.  Btw, pictured from left to right: me, Jim Donovan, Paul Bishop, Chuck Simmons, Petey Formica.

Anyway, the boat changed hands over the years, and here is some current anger directed at the Planet…! – ed.

Mr. Langan,
This email is being written to you because I have deep concerns that the PHRF rules have been ignored when the owner applied for a temporary certificate for his Capri 25, MKll . The boat in question is Angry Red Planet, sail number 87514. This boat came to my attention through an article within the archive of Sailing Anarchy. ( See Attachments). I am an Oceanside Yacht Club competitor, former Capri 25 owner, and current Capri 30 ( SN 87163) owner also participating in the OYC Twilight Summer Racing Series.

In reviewing the attached articles and the temporary certificate issued to Dan Avina for Angry Red Planet, I noticed several discrepancies, which were brought to the attention of the OYC Fleet Captain and the boat owner. The first noticeable irregularity was the “I” dimension. While the owner reported 32.25 ft, I measured it to be 34.00 ft. I then paid a diver (a current PHRF certificate holder) to measure the leading edge of ARP’s keel and the rudder. The keel was 59″ and the rudder length was 43″. Since Angry Red Planet is slipped next to a standard Capri 25, Toxic Haste (SN 97926), we measured Toxic Haste’s leading keel edge, which measured 47″. Toxic Haste’s standard rudder length was 34″. It also seems reasonable that with a longer keel, the ballast weight would also be increased.

The attached documentation and the measurement discrepancies, explain my deep concerns regarding the accuracy and fairness of the temporary PHRF rating assigned to Angry Red Planet. When the above information was brought to the attention of owner by the OYC Fleet Captain Jordan Nelson, Mr. Avina said would not do anything unless the PHRF Representative was present. I’m told you are the area “F” Representative.

I respectfully request that you mediate this situation.
Paul Gadbois

step through the fog