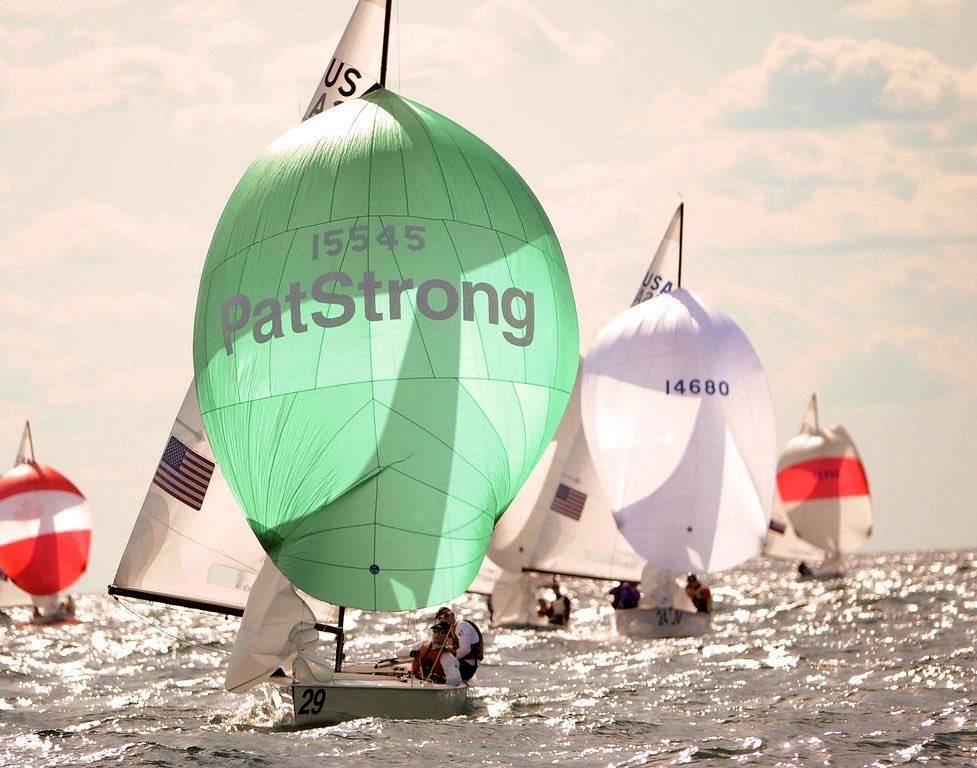 David Starck, with bro Tommy Starck and Jenna Probst, sailing “Patstrong” won the Lightning World Championship on Saturday.  With wife Jody having won the Master’s Worlds earlier in the week it truly was a family affair at Carolina YC for the Starck’s.

While the Starck family name is prominent this week, David and Jody would be the first people to tell you what matters is the family that is the Lightning class.  Of the 50 teams in the regatta, 22 boats had 2 or more family members, including the winner.  There were four husband-wife teams and one husband and wife who were each driving their own boats. The Rulli boat from Italy had the youngest sailor in the regatta with 14-year-old Stefano accepting that honor.

Just like when a real-life family pushes it’s members to be more than they thought possible, the Lightning family pushes each other to new heights through the competitive nature of the class.  Behind David was Tito Gonzales from Chile, who has won more Lighting Worlds than anyone, five, and a windy Etchells Worlds in San Fran.

Javier Conte from Argentina has won the last two Worlds and has an Olympic Bronze medal in the 470 class.  In fourth was Snipe and Star World Champ Augie Diaz, who had Laura Jeffers, the class Executive Secretary sailing with him.  Laura is maybe as much, or more, class den mother being the glue that keeps the Lightning family, old and new, together and thriving. This level of competition elevates everyone in the class.  With boats from three different countries in the top five and eight countries total – US, Chile, Argentina, Columbia, Brazil, Italy, and Canada – the Lightning family is thriving internationally.  No doubt covid kept other traditional class stalwart countries like Greece and Finland home this year.

The upcoming 2023 Pan-Am Games was seeking a 50-50 competitor gender balance for all their events, so the matrix of classes in the regatta meant that Lightnings could solve the gender balance problem by having one male and two females.  The Lightning has long embraced women as part of the crew and going to two women is not a disadvantage.  Look no further than Augie, Javier and Filipe Robles from Chile all sailing with two females and finishing 3-4-5 in this regatta.

Four points total separated 2-5, so half a point per race over eight races, essentially a coin flip.  US Sailing would do the sport in the US a huge favor to promote the hell out of the Lightning class having a Pan Am trials, and events leading up to that so that there were at least 15 teams at that regatta.  The Mixed 470 crews who aspire to the 2024 Olympic would gain great experience in this very competitive regatta by jumping in the Lightning for the Pan Am Trials, then toss in the Mixed+ J70 teams who would also be a very welcome addition to the Lightning Pan Am equation.

The Lightning family is very generous with lending boats, so anyone thinking about this event, asking is free.  Competitive sailing in the US can only be enhanced with more women sailing at a higher competitive level and the Lightning Pan Am equation is one excellent way to improve skills and have a really good time in the process. I’m looking forward to sailing in those trials.

David even extends the Lightning family concept to the name of his boat – Patstrong – named in honor of his young nephew Patrick Waldron who sadly passed away from Leukemia a few years ago.  Since that time David has dedicated his sailing, and much of his non-sailing life to both the memory of Patrick, and to raising funds for Leukemia research.  To that end, he has been part of the 11 Day Powerplay in Buffalo, which is literally a hockey game that goes on for 11 days, non-stop. This past winter David was one of 40 people who are now in the Guinness Book of World Records for playing in the longest hockey game ever, raising north of $2 million in the process.    Great film on the event here.

If you want to sail against great international competition with some of the world’s most accomplished family competitors, if you are a newcomer and want to feel like you instantly belong, come sail Lightnings. Welcome to the family.  Results here.