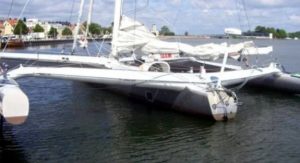 Multiple security services are reporting what may have been an opportunist approach and attempted boarding of a racing sailboat sailing near the coast of Yemen. While both the UKMTO and MICA Centre reported that a vessel was attacked while in transit 33 nautical miles southwest of Al Hudaydah, Yemen, the full nature of the incident remains unclear.

Analysts from Dryad Global are identifying the vessel as a well-known racing trimaran named Lakota. Between 1993 and 2000, the 60-foot vessel under the command of skipper Steve Fossett broke 12 records. The vessel was listed for sale with prices ranging from approximately $250,000 to over $300,000 before being reported sold earlier this year. The Associated Press said that famed French yachtsman Philippe Poupon acquired the trimaran and planned to sail around the world. The vessel is normally operated by a crew of up to five people. It is currently registered in Hong Kong. Read on.

the state of the art