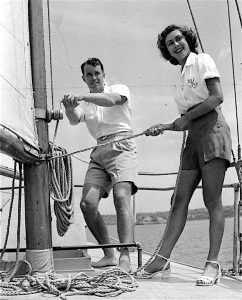 It’s official. The two-handers are no longer a separate division in offshore racing in Australia. That distinction has lasted for just one classic blue-water event – the 2021 Sydney-Hobart Race last December.

As foreshadowed in SA a fortnight ago the Cruising Yacht Club of Australia has enshrined its new rules in the Notice of Race for the Sydney-Gold Coast Race beginning on July 30. Two-handers using autohelm can now compete alongside fully crewed yachts for the same handicap prizes.

We can safely assume that this NoR, released yesterday, reflects what is intended to be the club’s policy for all major offshore races in the future. It adopts the recommendations of the special Working Group assigned by the club to consider the controversial issues relating to short-handed offshore racing and autohelm that emerged during the run-up to the COVID-cancelled 2020 Sydney-Hobart. The group’s recommendations were then endorsed by the CYCA Board.

In essence, two-handers can now compete for IRC and ORC honors if the boat “limits the output of the autohelm to the rotation of the boat’s stern rudder(s).” But the surprise for many competitors is that there is no limitation placed on the data input to that autohelm – it can be as complex and sophisticated as money can buy.

Meanwhile, a two-handed boat that uses autohelm to control multiple appendages – i.e. the rudder(s) plus canting keels, daggerboards, foils, canards or DSS – can only compete for line honors or PHS (Performance Handicap) trophies. It is difficult to imagine there would be many owners prepared to race in just those two divisions. (There are no IMOCAs currently in Australia.)

So where does this leave the conventional fully crewed boats? Interesting question.

They are forbidden from using autohelm of any kind. Section 7.1 (d) of the new NoR prohibits the use of autohelm for fully crewed boats in these terms: “The rotation of a boat’s rudder shall be adjusted and operated only by the power provided by the crew”. A refinement of that prohibition is repeated elsewhere in the NoR as: “A fully crewed boat shall not use stored power for steering”.

It has not taken the dockside pundits long to raise the obvious anomaly: why is it that the two-handers will be allowed to use autopilot systems while fully crewed yachts – competing in the same divisions – will not? Will there be a rating adjustment to compensate for this apparent apples-to-oranges disparity?

Potentially, yes. IRC Part B, 8.2.1 has that covered. “A boat may additionally hold a separate short-handed certificate. This shorthanded certificate shall be valid only for racing in classes, or divisions of classes, for no more than 2 crew, included in a Notice of Race.”

However, the new CYCA NoR for the Gold Coast Race doesn’t recognize the two-handers as a separate division. That distinction has been abandoned. But the IRC rule offers some wriggle-room: “When specified in a Notice of Race, boats holding short-handed certificates, and racing in a short-handed class or division, may also be scored in the overall results of the race.”

OK, but what are the elements that would change a boat’s rating when sailed two up? The IRC is quite specific: “The short-handed certificate will be clearly identified and shall only vary from the primary certificate in respect of, mainsail widths, headsail dimensions, flying headsail dimensions, single furling headsail allowance, the use of stored power, SPA, STL, SPL, spinnaker pole/bowsprit, whisker pole, number of spinnakers, number of flying headsails, moveable ballast and variable ballast.”

But, (and it would seem to be a very big ‘but’), at the end of IRC rule 8.2.1 there is a restriction that might be in conflict with the CYCA Notice of Race: “A boat holding a shorthanded certificate shall use that certificate for races for no more than 2 crew.” In other words, if a shorthanded boat is racing within a conventional fleet then it is possible that none of its IRC shorthanded rating adjustments would apply.

Compounding this sense of anomaly are the different approaches to maximum and minimum LOA, and crew numbers. The minimum LOA for all boats is 30 feet. The maximum for fully crewed boats is 100 feet, and 65 feet for the two-handers.

Meanwhile, Rule 3.4.1 (a) of the NoR requires that fully crewed boats “shall have a minimum of 5 crew” (recently reduced from 6). That requirement has always been justified on safety grounds. So a 30-footer still needs 5 crew to be sailed safely yet a 65-footer can now be raced with just two, plus autohelm? The logic is elusive.

should i stay or should i go?