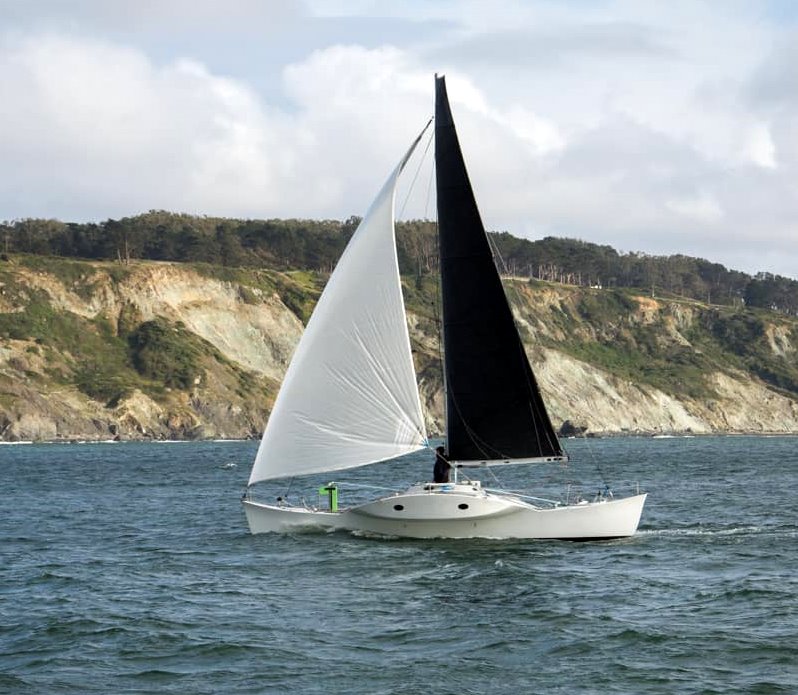 A few years back, well quite a few now, I sailed across the Pacific with the New Orleans-based sailor Ryan Fynn. We were aboard that crazy trimaran that was featured in the even crazier movie Waterworld. Kevin Costner didn’t join us for the trip but in his place as skipper was the indomitable Lia Ditton, she of multiple ocean rowing crossings. It was a perfectly perfect trip until the final night before we arrived in San Diego. We had some breeze up the chuff and we had Ryan Finn on the helm. There was a madness in his eyes when the boat speed exceeded the sanity level. I didn’t know it then but Ryan is a speed junkie with a bent toward innovation.

Fast forward a decade and Ryan has, in the words of the world-class yacht designer Merfyn Owen, “completed what I hope will be recognized as one of the greatest feats of seamanship ever completed by an American sailor.” Yup the same Ryan Finn. The ‘greatest feat of seamanship’ that Ryan had completed was to sail solo from New York to San Francisco; on a 36′ Proa.

Now that record has been around a while. The Clipper Ship Flying Cloud set the record in 1854 (89 days and 8 hours) and held it for over 130 years until the breakthrough-designed Thursday’s Child completed the passage in 80 days and 20 hours. The current record is held by the French racing yacht Gitana 13 with a time of 43 days and 38 minutes. Gitana 13, by the way, is 110-feet long and was fully crewed.

As I mentioned Fynn did the same trip single-handed on a 36-foot Proa, in 93 days. This is quite extraordinary. For a start a Proa is not the kind of boat one would think could manage an upwind rounding of the world’s fiercest Cape. Finn’s boat Jzerro is essentially a double-ended plywood boat, but Ryan Finn managed it and without hardly a whimper. His (almost) daily updates were matter-of-fact and talked about tactics and the sometimes awful conditions, not how long, hard, cold, and miserable the trip was at times.

A Proa, by the way, is a multihull with two different size hulls. The small hull is always to windward while the main hull is to leeward. “What happens when you need to tack?” one might ask. No problem. You tack the rig, not the boat. The leeward hull is symmetrical so you just drop the headsail, the one set on the bow, and set another on the stern, which in turn becomes the new bow. Swing the mast around and away you go; ingenious.

I will come back with a longer piece on the trials and travails that Ryan had to go through just to make the start, let alone the extraordinary accomplishment of rounding Cape Horn and what must have been the amazing feeling of sailing under the Golden Gate Bridge, but for now let’s celebrate the American Spirit and this incredible accomplishment that was funded by a gofundme page and a lot of grit and hard work.

the other santa cruz