much ado about andoo 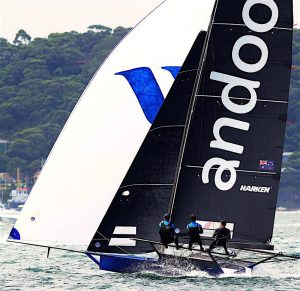 The fog of uncertainty around the fate of the supermaxi formerly known as Comanche is clearing – somewhat.

This much we know: the 100-footer has been chartered, with an option to buy, from “someone in Singapore” by Sydney businessman John ‘Herman’ Winning. (He is known by that nickname to differentiate from his father, also named John Winning, who is also a dedicated racing sailor.)

The fact that no one seems able, as yet, to confirm the identity of the Singaporean owner is a trifle mysterious. It certainly would appear to be a convenient arrangement in relation to the recent ban by World Sailing on any boat with Russian connections. But maybe that’s just a coincidence.

Phone camera snaps from the Caribbean indicate that the boat’s name has already been changed from Comanche to Andoo. Andoo? Well, Andoo is the name of the Down Under business founded and run by ‘Herman’ Winning. It advertises itself as “The home of feel-good living” and sells furniture, homewares and appliances. He also races an 18-foot skiff under that name. 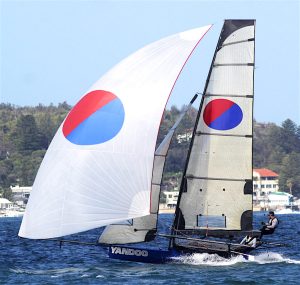 The word itself is a contraction of “Yandoo”, which is the name of the succession 18-footers raced on Sydney Harbour by his father, John. That word, in turn, was originally the masthead title of an irreverent news sheet produced by a group of Australian soldiers (including John Snr’s father – also a sailor) during WWII.

Meanwhile, a dock berth has already been booked in Sydney for Andoo and it seems certain the boat will be campaigned up to, and including the next Sydney-Hobart race. As reputedly still the fastest 100-footer in the world, and a previous line-honors winner, she has a title to defend.

There will be no lack of competition. Wild Oats XI is soon to emerge from the shed where she’s languished – wrapped in plastic – for the past two seasons. The Oatley family plans to sail her at Hamilton Island Race Week (August 21-27) and will surely want to have another crack at the Hobart.

Also based in Sydney is LawConnect (the former Loyal). In addition, the Black Jack team will be keen to repeat their 2021 Sydney-Hobart triumph. If Scallywag then comes down to play boats again from Asia that would make five supermaxis on the starting line.

Whatever, it promises to be an epic contest between the Big Swinging Keels.