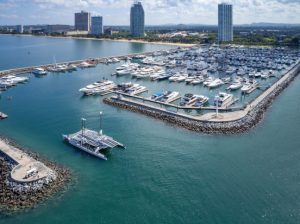 Energy Observer continues to sail across the oceans in south-east Asia, the 71st stopover of its round the world Odyssey being in Thailand.

Following an ambitious stopover in Singapore, which gathered major players in the maritime transport and energy industries around the vessel and its pedagogical exhibition village, our floating laboratory left the city-state to set course for Thailand, with Pattaya as its designated entry port.

Thailand’s energy policy consists of reducing its dependence on natural gas to bolster its energy independence. The country has a long and rich history, attaining universal access to electricity several decades ago, with its energy consumption per inhabitant doubling over the past 20 years. Today, Thailand aspires to become the ‘Silicon Valley of Asia’, by completely transforming its electricity sector and investing heavily in renewable energies. Read more.