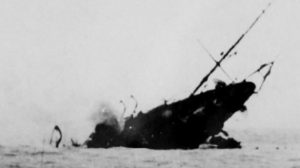 A Royal Navy warship has been found by divers on the Scottish seabed – almost 105 years to the day it sank. Torpedo boat destroyer HMS Jason has not been seen since she struck a mine and sank off the island of Coll in the Inner Hebrides in April 1917.

But after five years of research and surveying, the wreck of the Jason was found first on sonar – then confirmed by a team of divers who plunged 93 metres into the chilly waters.

They found the warship in surprisingly good condition – but minus her bow, blown off when she struck the mine… ironically during a minesweeping operation in company with HMS Circe. Read on.

in love with the coco