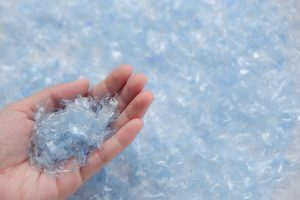 No, not the white wintery fluffy type of snow! Depending on where you live there could be snow in April, but this time it’s snowing in the ocean! As long as there’s been marine life, it’s been snowing – a mixture of flakes that are mostly composed of dead things – animal carcasses, feces, mucus, viruses, dust, etc making their way into the depths.

This actually helps trap carbon in the seafloor, but now microplastics are starting to show up in this snow and is harming nature’s cooling process. A recent model found 99.8 percent of plastic that entered the ocean since 1950 had sunk below the first few hundred feet of the ocean. Scientists have found 10,000 times more microplastics on the seafloor than in contaminated surface waters.

In 2010, it was estimated that the ocean produced 340 quadrillion aggregates of marine snow which could lead to 463,000 tons of microplastics falling to the seafloor every year. To read about this marine snow and how microplastics are affecting deep water processes you can see this article.

hold on and holla’

a cup full of oats