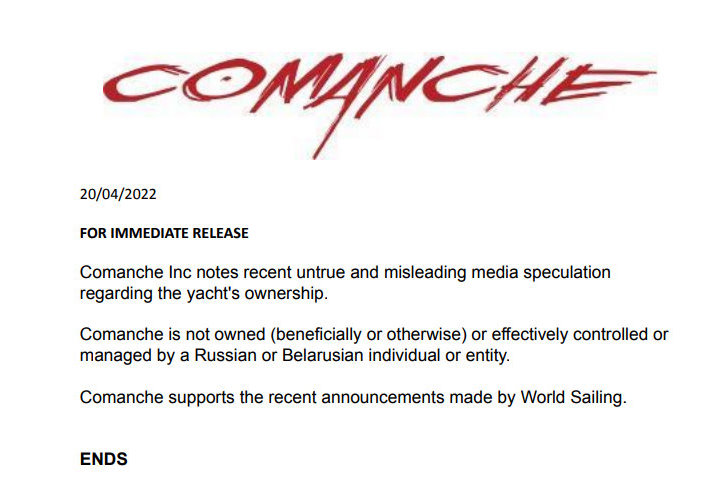 Well, those guys – whoever they are – should update their online info. The last hard report was that Jim Cooney sold Comanche “to Russians interests”. Last October Sail-World reported her as “Russian owned”. Since then there’s been no independent reporting of an ownership change that I can find.

However, LiveSailDie has offered this today:  The recent announcements by World Sailing are in regards to a ban put in place effectively stopping Russian and Belarus sailors and officials from competing in or being involved with any World Sailing sanctioned events.

If you Google “who owns the racing yacht Comanche”, or something like that, you get the name Jim Cooney, however, Cooney sold the boat after winning the 2019 Rolex Sydney Hobart. But if you click on the Comanche Racing Wikipedia page, this is what comes up…

“Soon after the completion of the 2019 Sydney-Hobart race, Comanche was reportedly sold to a Russian interest group. Details of the sale have not been disclosed as of yet.”

But we all know Wikipedia is as reliable as a screen door on a submarine, so we take that information with a grain of salt.

Comanche doesn’t really have a social media presence. A few years ago, we could have sworn they had a Facebook page, and there is an instagram account, however that hasn’t been updated since 2019 after they won the Rolex Sydney Hobart Yacht Race.

Mitch Booth is the current skipper of the boat, and the owner on results is referred to as “Comanche Racing”.

So… Who actually owns the 100 footer Comanche?