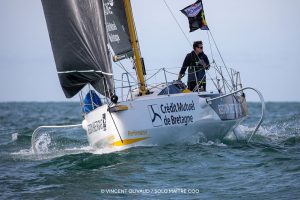 After leaving Les Sables d’Olonne yesterday at the very end of the morning, the 33 competitors in the 19th Solo Maître CoQ had some tricky first miles, particularly downwind of the Ile de Ré where they made numerous tacks edge flush with the coast to play with the currents, so much so that one of them, Basile Bourgnon, ran aground.

More fear than harm, fortunately, for the young skipper of Edenred who managed to get out of his situation on his own before resuming his race. A race which, as expected, then quickly turned into a “speed test”, which notably enabled Tom Laperche (Brittany Region – CMB Performance), the defending champion, to regain command of the fleet, previously occupied by Alan Roberts (SeaCat Services), author of remarkable mastery over the first section of the course. A course of which the second half now remains to be completed now that the leaders have overtaken Belle-Ile. Read on.