looks good to us 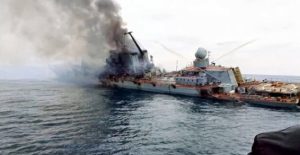 The first images believed to be of the damaged cruiser Moskva began circulating on social media on Sunday, and open-source intelligence analysts suggest that the photos appear to be authentic. They match closely with previous images of Moskva, and the details of the scene align closely with one of the two competing accounts of the vessel’s demise.

Moskva was the flagship of the Black Sea Fleet, and she was the largest surface combatant lost in action since the end of the Second World War. The Russian Navy has released very little information about the circumstances of her sinking. According to official accounts carried by Russian state media, the Moskva was badly damaged by an accidental fire and a magazine explosion, and later went down in rough weather while under tow. No official casualty numbers have been released.

The government of Ukraine has claimed that it hit the Moskva with two domestically-produced Neptune anti-ship missiles from a coastal defense battery. The Pentagon has confirmed Ukraine’s account of the casualty.