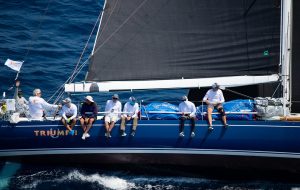 Triumph will attempt to repeat our overall win from last year’s 2021 Newport 2 Ensenada Race.  The President of the United States Trophy is magnificent, and we are honored to be a part of the storied history of this epic race and emblazoned on a trophy with some of the greatest West Coast racers over the past 75 years.

We again have a great team with many of the same crew returning for 2022.  We have a fast boat and a positive attitude and no covid restrictions.  Will it take another creative starting strategy – yeah, it just might.

But it may also take more risk-taking and focused sailing.  As many witnessed, especially those on the committee boat, Triumph started last year’s race on the wrong starting line and had to make a hairball gybe & tack maneuver to get back and start on the correct starting line.  The committee boat appeared to be erupting in laughter.  I don’t hold that against them.  The crew, other than our esteemed head chef & master navigator/tactician, Jeff Thorpe, were a bit confused but tried not to show it – always being obedient and trusting of our tactician.

I have done enough sailing to know that the start can be the most important part of a race and getting off the line ahead of the fleet puts you in position to win. It can be the difference between a win and the stuff after that.  On the flip side, I also have enough experience to know that if you don’t win the start but keep your composer, sail the best race you can, stay positive; and if you can minimize the mistakes, get a few wind shifts, a team always has a chance to recover and win.

It starts with a great crew.  And we had just that. We had guys with great attitudes and ton of N2E experience.  We also had the master navigator and head chef, Jeff Thorpe, to help us find our way to back to the fleet, pick a line and navigate the treacherous flotsam and jetsam off the Baja coast and on to Ensenada.  And after that seemingly botched start (which turned out to not be botched but actually be part of a bigger game plan and strategy (the crew didn’t know until the end – Thorpe is really good at keeping secrets), we knew Jeff would keep us focused on the prize – which he did.  He had us thinking we had to make up for lost ground so we would sail harder and even more focused.

We diverged from the optimized Expedition routing and sailed straighter and lower than most of the fleet that was further offshore.  It was a risk as the weather algorithms for the optimum course told us to be offshore – we didn’t follow that.  We sailed with intensity, stayed focused and gained on the competitors, in by inch.  The strategy worked and thanks to a nice puff of wind at the finish and our crew’s focus – about 60 minutes after the finish we had a sense we might have won the race overall!  Which we did. Wow!

Due to this skipper’s domestic restrictions, we turned and burned back to San Diego where we celebrated at San Diego Yacht Club (SDYC) with some grub and cold beer – sending our esteemed bowman and Japanese & Spanish translator, Zach Hanna, down to Ensenada to see what was going on and get our pickle dish.  Had I known about the massive quantities of incredible N2E Race trophy treasure that awaited Triumph in Ensenada, for winning our fleet and overall, I might have violated my “domestic parole” and made a run for the party – maybe I will do that this year if we repeat.  Hanna signed the waiver for the trophies and smuggled them across in the trunk of Merry Cheers’ car.

What will our strategy be this year?  You’ll have to wait and see.  We have been using the metaverse to virtually practice a new starting strategy that may surprise even those leather necked, gnarled-toed, offshore veterans.  We are ready!  And we may have (supply chain willing) a special uniform some in our crew will be donning – not sure I am supposed to say but don’t be surprised to see Dolphin shorts and a mullet or two on the bow!

We love the Newport to Ensenada Race and the treasure that comes with winning especially the Harry S. Truman Presidential Trophy.  We feel that if we can combine the right measures of risk & strategy with our great crew, we might repeat – at least we have a chance!