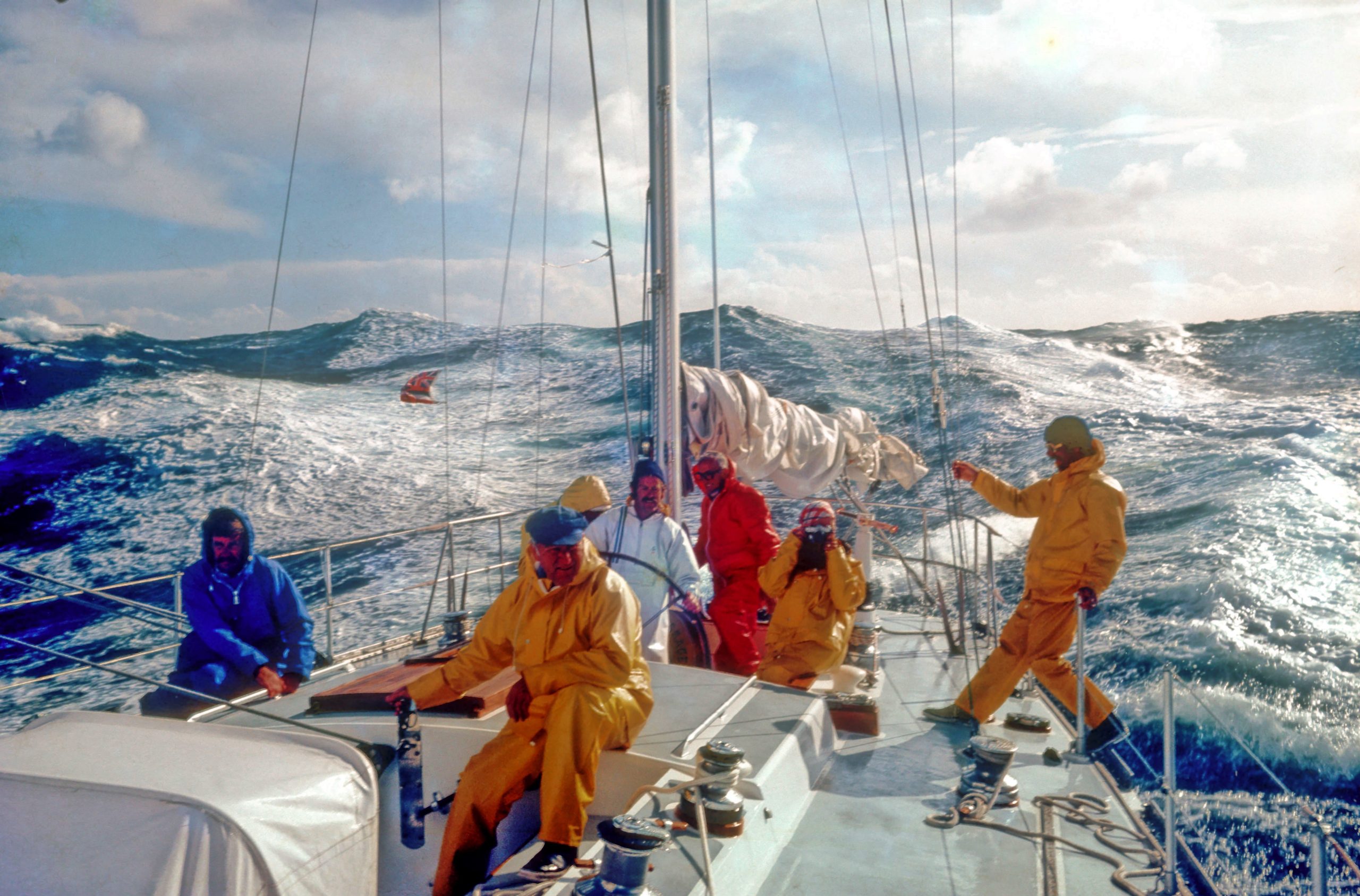 I left Bravura after the ’77 Sydney-Hobart Race and joined the crew of the seventy-three-foot ketch Windward Passage, which had also competed in the Hobart race. Rob Vaughan, who had been Bravura’s professional skipper when I sailed aboard her in the previous year’s race to Tahiti, had moved on to skipper Windward Passage, and Rob invited me along to help deliver the boat north to Hong Kong. It was a great opportunity to sail on the iconic vessel, visit a part of the world I hadn’t seen, and voyage again with my friend and mentor.

Windward Passage’s crew for the delivery north was a mix of experienced ocean sailors and some rookies. There were four of us with offshore experience: Rob and his girlfriend Debbie, both of whom I had sailed with previously on Bravura, Mogan, a Californian who had been a part of the crew since the boat left the U.S., and myself. Les, an elderly friend of Rob’s father, and Peter and John, two Tasmanians my age were all aboard for their first offshore adventure.

We had a leisurely and uneventful cruise up Tasmania’s eastern coast, across the Bass Strait, and up the east coast of Australia stopping in Sydney and Mooloolaba, just north of Brisbane.

It was overcast when we departed Mooloolaba, but otherwise, the weather seemed fair as Windward Passage headed north outside of Fraser Island and into the Coral Sea towards New Guinea. Shortly thereafter though, Rob heard a warning on the shortwave radio that a deep low-pressure area was brewing in the waters northwest of our position.

The wind and seas were starting to build with the influence of the weather system, but the breeze was from the south and pushed us in the direction we were headed anyway. Unfortunately, we were already well offshore and there was nowhere to hide from the storm. To our west lay the jagged and dangerous Great Barrier Reef. We didn’t want to turn around and head back south into the wind and sea, and there was no shelter to the north or east. We kept going.

The crew had settled into three – two-person watches. Rob was standing watch with Les, Mogan with John, and I was with Peter. That put one experienced guy with a rookie on each watch. Debbie was doing most of the cooking so she didn’t stand a watch.

The wind and seas continued to build, fortunately still from behind us, and we shortened sail as conditions worsened. First one reef in the mainsail, then two. We shifted through smaller and smaller jibs until we removed them entirely and then dropped the mainsail so we were running under bare poles.

This progression through the sail inventory took just over a day. We continued to track the reported location of the storm as it moved slowly to the east ahead of us and we approached it from the south. Fortunately, in the southern hemisphere, the wind in these lows has a clockwise rotation, and this kept the breeze behind us as we danced with the devil.

The wind continued to increase and the size of the seas increased with it. Windward Passage’s anemometer had broken during the Sydney-Hobart race so we had no idea how windy it was, but standing on deck without holding onto something wasn’t possible with so much wind pressure. The sound of the wind in the rigging increased from a howl to an incessant scream.

Navigation was a problem too. Rob hadn’t been able to take a sextant sight due to the complete overcast since our departure from Maloolaba days earlier, and we were determining our position by dead reckoning, not reassuring in an area littered with hazards. At one point we had to zigzag to the west through a fifty-mile-wide channel between two coral reefs. Both shoals had lighthouses on them, and we didn’t see either one, so our navigation was apparently good enough.

Right in the middle of the channel, Rob sighted a freighter heading in the other direction idling along slowly, barely maintaining steerageway and taking the huge seas head-on. Rob called them on the VHF radio and spoke to the Captain who confirmed that our DR position was accurate and lamented that these were the worst conditions he had experienced in more than forty years at sea.

Conditions continued to deteriorate as we closed to within 100 miles of the low’s reported position, our closest point of approach. The system was now directly north of us and moving in an easterly direction. The storm’s huge waves were breaking and threatening to broach the boat. Running under bare poles Windward Passage would hit ten knots as she surfed on the face of each passing wave and then slow down to four knots as she slid down their backs. The boat was moving fast enough with just wind pressure on the bare spars to steer easily though, and as long as the helmsman took the breaking seas directly on the transom, she was handling the conditions just fine.

Windward Passage’s ten-foot-wide crew cabin, separated from the salon by a centerline bulkhead, had four berths against the starboard hull, two sets of upper and lower bunks. Four of us occupied these outer berths. The centerline bulkhead had another upper/lower bunk set in front of a large built-in chest of drawers, but these berths were empty.

Our accommodations were cozy, but sleeping in those conditions was next to impossible. The screaming wind was terrifying enough, but laying in my aft lower bunk against the skin of the hull, I could hear the breakers as they approached and I’d tense up as they engulfed the boat and she squirted out from under each one.

In the middle of the night, I heard a particularly large breaking wave approaching, and I instinctively held on to the bunk frame as it hit us. The helmsman did not get the boat headed directly downwind before the wave hit, and the breaker picked Windward Passage up and threw her down on her side, mast in the water. I managed to stay in my bunk until the boat righted itself, but the rest of the cabin’s occupants were not as fortunate.

Peter, above me in the after upper berth, flew across the cabin and landed on top of the dresser chest. Mogan in the forward lower landed in the lower centerline bunk and John above him in the upper centerline bunk. All were uninjured except John, who couldn’t move and we feared may have broken his neck upon landing.

The boat righted itself after a few seconds, and as soon as she came up I rushed into the aft cabin to find Rob, who was on watch with Les, standing at the foot of the aft companionway. Les was driving and Rob had been below entering the log when the broach occurred. Rob and I scrambled up the ladder to find Les tangled in the mizzen rigging on the port side of the boat.

Les had been thrown out to the end of his ten-foot safety harness tether during the knockdown, but since Windward Passage was so beamy and he was clipped into a centerline padeye, he ended up on deck when the boat righted itself. He appeared to be uninjured but was in shock so we carried him below and put him in his bunk. 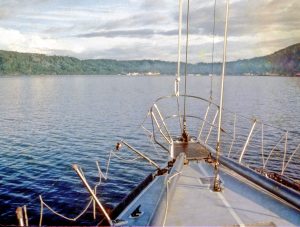 We had lashed the doused but still hanked on storm jib to the perforated aluminum toe rail on the port side of the foredeck, but the force of the broach had broken the jib’s lashings, torn the two forward most lifeline stanchions on the port side right out of the deck, and bent the bow pulpit.

The folding seats in Windward Passage’s small crew cockpit just aft of the mast were also ripped from their hinges by the force of the broach. That was amazing considering the sides of the cockpit were more than six feet inboard of the deck’s outer edge. All of this damage was superficial though, and once we got the jib resecured and broken stanchions under control Windward Passage was back underway heading north.

The storm started abating shortly thereafter, and within a few hours, it had moved off to the east. A day later, it was flat calm and we were powering. John’s neck wasn’t badly injured after all, and after a few days of bed rest, he was out of his bunk and standing watch again.   – Anarchist Noodle.

hell of an open

Garda At The Gates