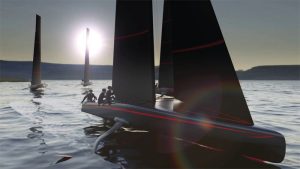 The trickle-down effect is supposed to happen slowly but this time its pace is very fast indeed. Just five months after the end of the 36th America’s Cup, Persico Marine launched a fully engineered concept for a 40ft foiling monohull loaded with America’s Cup technology and systems. But the Persico Fly40 isn’t a leading-edge one-off, it’s a one design class for owner-drivers with a fully managed regatta circuit – and the price, and ongoing cost of ownership, is a lot lower than what TP52 owners, for example, are currently paying. It’s a compelling idea and one that Persico is in a uniquely strong position to deliver.

‘We built two boats for Luna Rossa which took a couple of years and we built the one design arms for all the teams,’ says Mark Somerville, general manager at Persico Marine. ‘That’s when the concept was developed. We put in place the technology and tried to capture as much as we could within the AC period to have that trickle-down effect happen as quickly as possible so we can bring this new technology of foiling boats to the public.’