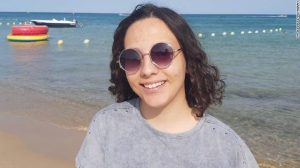 Teenager Eya Guezguez, who sailed for Tunisia in the Tokyo 2020 Olympics, died in a training accident Sunday, according to a Facebook post from the Tunisian Olympic Committee.

Guezguez, 17, was laid to rest Monday in Ariana, Tunisia, after Asr prayer, the Tunisian Olympic Committee said on Facebook.

According to Olympics.com, Guezguez was sailing with her twin sister Sarra when their boat capsized due to strong winds. Sarra, who competed with Eya in Tokyo, survived the accident.
The pair was training with the Tunisian national team for upcoming regional and international competition, the Tunisian Olympic Committee said. Olympics.com reports that the sisters were hoping to qualify for the Paris 2024 Olympics.

Last summer, Eya and Sarra Guezguez finished 21st in the 49er FX event at the Tokyo Olympics.
“May Allah have mercy on the deceased, grant her eternal rest in Paradise, and grant her family and relatives and the entire sports family patience and solace. We belong to Allah and to Him we shall return,” the Tunisian Olympic Committee said. Read on.