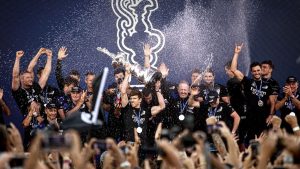 It’s all very well to pontificate on the America’s Cup from the standpoint of a disinterested observer (say, one from Shanghai, just to pick a random location).

But try seeing the same issues through the eyes and heart of a New Zealand sailing supporter.

To most Kiwis, the ETNZ decision to hold the next Cup series in Barcelona – or indeed anywhere other than in New Zealand waters – must seem like a betrayal. No amount of slick PR spin will change that impression. Like Russell Coutts before him, Grant Dalton will now be seen as a turncoat ready to abandon his own country for a fistful of Spanish cash.

If that sounds harsh, consider this: the New Zealand public has willingly given hundreds of millions of dollars over decades to sustain their nation’s America’s Cup ambitions. ETNZ only exists because of that generous support. The Cup, when they won it, was theirs – the reward for such patient, long-term investment.

If Dalton believes he can walk away from all that with his reputation unscathed then he misjudges the strength of Kiwi patriotism and pride.

Meanwhile, what of the actual holders of the Cup, the Royal New Zealand Yacht Squadron? Three decades of loyal commitment to the event are now brushed aside.

Rather than giving the next defense its natural home, the club is reduced to cipher status. Their involvement is only required to satisfy legality in the Deed of Gift. Again, the arrogance and insensitivity of Dalton & Co is breathtaking.

As for the New Zealand public, they are treated with similar contempt.

When the AC37 races start in the waters off Barcelona it will be 2:00 am in Auckland. Not exactly peak viewing time in the one television market that could have delivered truly impressive ratings for a sailing event.

make it go away! At the Upper Keys Sailing Club in Key Largo we recently started mixing our Optis into the Portsmouth Fleet. During the TIB Bank Regatta one Opti sailor was faced with a dilemma..