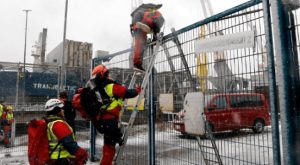 Greenpeace activists have been targeting Russian energy shipments at ports around Europe since the beginning of the invasion of Ukraine, and the group’s Finnish affiliate is extending the direct action campaign to cover coal cargoes.

On Tuesday morning, 10 Greenpeace activists scaled a fence at the Salmisaari coal terminal in Helsinki, hoping to prevent the unloading of the bulker Transbaltic. The Maltese-flagged cargo ship had been loaded with coal on Sunday at Ust-Luga, Russia, on the Gulf of Finland.

To block the delivery, the protesters climbed up on three of the terminal’s unloading hoppers, briefly blocking most cargo operations. The Helsinki fire department and local police responded to the scene and used a hook-and-ladder truck to retrieve the protesters from their positions. Nine people were detained by about 0900 hours that morning, according to the Helsinki Police.  Read on.