who said it doesn’t blow in sd? 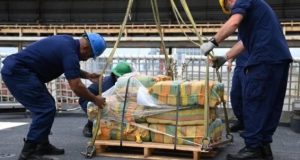 San Diego? Nobody told me….

On Thursday, the U.S.?Coast Guard Cutter Kimball offloaded more than 11,300 pounds of cocaine with a street value of $220 million in San Diego.

The drugs were seized in the Eastern Pacific off Central and South America,?and they include the results of during eight interdictions of suspected drug smuggling vessels in February and March. Four ships carried out these operations, including the cutters Kimball, Legare and Spencer and the Royal Canadian Navy’s HMCS Yellowknife. Legare led the pack with four interdictions and 4,700 pounds of cocaine seized.