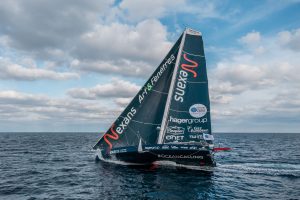 A study by three French institutes: Ifremer, the University of Bordeaux and the IRD (a public research institution), reveals that the surface water of the Atlantic Ocean is twice as polluted by cellulose fibers as it is by microplastics. This study, based on measurements taken from an offshore race boat, also shows that the North Atlantic is more affected by plastic pollution than the South Atlantic and questions the dynamics of the subtropical gyre (area with a high concentration of microplastics) since the pollution levels measured there are lower than expected.

During the last ‘Vendée Globe’, a single-handed round the world yacht race, French skipper Fabrice Amedeo collected 53 samples using the microplastics sensor fitted aboard his Nexans – Art & Fenêtres sailboat. The various teams led by Catherine Dreanno, a researcher at Ifremer Brest, LDCM lab, Jérôme Cachot, professor at the University of Bordeaux, EPOC lab, Sophie Lecomte, Director of Research at CNRS, CBMN lab and Christophe Maes, Head of IRD research, LOPS lab, have just completed the analysis of 300 µm mesh filters. They give us the low-down on their initial analysis. Photo © Jean-Marie Liot.