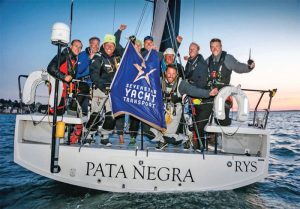 The Round Britain and Ireland race lives on long in the memory of anybody lucky enough to have competed in a previous edition…. But winning the toughest of European offshore events is unforgettable

If you ever wondered if you’re tough enough, the 2022 Sevenstar Round Britain and Ireland Race is for you. Three times longer than the Fastnet, some round-the-world veterans even go so far as to suggest it could be as hard as a global circumnavigation.

You don’t have to venture into the farthest flung corners of the world’s oceans to encounter the harshest sailing conditions. If you live in the UK, they’re all in your backyard. ‘The Sevenstar Round Britain and Ireland is one of the toughest races I have ever done,’ says two-time Clipper Round the World Skipper, Gareth Glover. ‘At times racing in the Clipper is simple, pointing in one direction for weeks on end. This race has tidal gates, wind holes, 40 knots of breeze, big sea state; it is just relentless.’

First organized by the Royal Ocean Racing Club in 1976, the 1,805nm Sevenstar Round Britain and Ireland Race is one of the highest peaks that any offshore racer could hope to scale. Held every four years, the next edition will start on 7 August 2022. Starting from Cowes and exiting the Solent to the east, the course takes a westerly clockwise direction around a myriad of headlands, through treacherous tidal gates. Read on.

it’s lonely out there