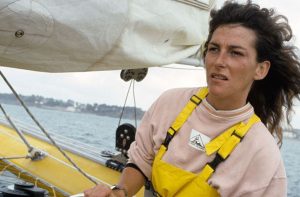 It may not be very common to see women accepting – or having the opportunity to accept – challenges such as that of sailing single-handed around the world non-stop, but more and more are following in the footsteps of some brave female sailors who broke all sorts of barriers.

Ocean sailing accounts for many great sailors who for one reason or another have earned a place in history. However, it is striking how few female seafarers embark on such great adventures and, in most cases, their little visibility.

It does not take much research to find many female sailors who have left their mark in ocean sailing. United Kingdom and France have been the birthplace of the first female pioneers in offshore racing.

If we look for the reasons why only a small number of women, compared to men, have ventured to face the challenge of the oceans we can think of the obvious cultural reasons, seafarers were once exclusively men. The first woman to have circumnavigated of the world was Jeanne Baret from France in 1767 although, in her case, she embarked disguised as a man to be part of an all-men crew. Read on.

a cloud of sail