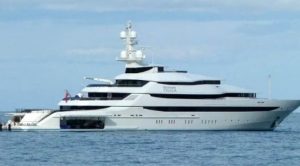 This makes me smile.  Now go get Skorpios – ed.

French authorities are increasing their enforcement efforts under the European sanctions against Russia both detaining commercial merchant ships and in a high-profile action announced they had seized a superyacht linked to one of Russia’s wealthiest oligarchs.  France’s minister of the economy, Bruno Le Maire thanked customs officials for their efforts citing offenses under the newly imposed sanctions.

Customs inspectors boarded the superyacht Amore Vero, a 281-foot vessel registered in the Cayman Islands that features amenities rivaling those of a deluxe cruise ship, late on March 2. According to the minister the vessel had arrived at a French shipyard in La Ciotat near Marseilles on January 3 for three months of scheduled maintenance.  Read on.

we are so fucked