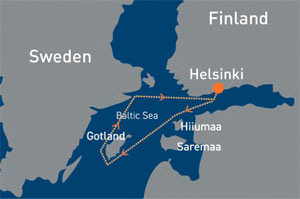 The RORC Baltic Sea Race is set to become the newest and most northerly member of the 600-mile club. Due to start on 21 July 2022, the inaugural race has come about thanks to a collaboration between the Royal Ocean Racing Club (RORC) and the Ocean Racing Alliance (ORA).

The race of approximately 630 nautical miles will start and finish off Helsinki in the Gulf of Finland. The course will incorporate the Swedish island of Gotland, located approximately 250nm southwest of Helsinki. The race is open to boats racing under IRC, Mocra, Class40 Rules and a number of other class associations.

RORC Racing Manager Chris Stone is excited about the prospect of the new race, which will take place in alternate years. ‘The Royal Ocean Racing Club has a history of organising new offshore races, such as the RORC Caribbean 600 and the RORC Transatlantic Race,’ he says. ‘The Baltic Sea Race reflects the huge amount of interest we have received from sailors in this region. This new event has all the criteria for producing a race that is ideal for offshore racing, as well as good logistics for competitors and the race team. On top of that, our partners in Finland have a real passion for hosting a race in their own region.’ Read on.