winter in so cal 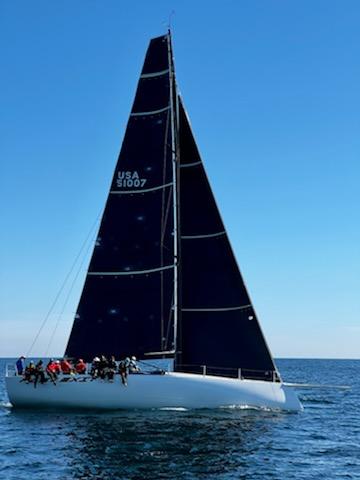 The Islands Race, a 142-mile SoCal jaunt from Newport Beach, around both Catalina Island and San Clemente Island and finishing in Sun Diego is, for all intents and purposes, done.

To the surprise of no one, the turbo Volvo 70 Pyewacket crushed, with a clean sweep of first to finish, first in class, and first overall. Ho-hum. We kid.

The breeze was not great, but surprisingly not as bad as forecasted with boats finishing early this am, with the slower and less well-sailed boats finishing hours later.

A couple of things stand out from behind my computer screen; a rather dismal finish by the supposedly super quick Botin 56 Bad Pak – 6th in ORR – A, and 13th overall in ORR – makes one wonder what is up with that program.

Yes, they have new twin rudders, and yes there is a fuck ton of tuning that goes into these complicated machines, but we would just expect more out of this boat, led by Bruce Nelson.

The SC 70 Illusion, for the millionth time, yet again proves to be the opposite of an Illusion, finishing first in ORR – B, and second overall in ORR overall. The boat simply continues to amaze. And the Rogers 46 Lucky Duck, with Quantum’s Jeff Thorpe onboard, now is the better of the other Rogers 46, Brettwalda. Amazing what fast sails and talent can do. Track what’s left of the fleet here.