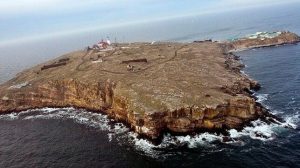 In the opening day of its invasion of Ukraine, the Russian Navy captured Snake Island (Zmiinyi Island), a small border patrol outpost in the Black Sea about 70 nautical miles south of Odessa.

“After . . . shelling by the occupiers’ naval weapons and combat aircraft, the infrastructure on the island was destroyed. According to available information, Zmiiny Island [Snake Island] has been captured,” the State Border Guard Service said in a statement. “The enemy today repeatedly tried in vain to intimidate Ukrainian defenders on the island with demands to surrender. The border guards and [armed forces] bravely held the defense.”

The Russian Navy warships Moskva and Vasily Bykov bombarded the island with deck guns before sending Russian soldiers ashore to take control of the facility, according to Ukrainian media. 13 Ukrainian border guards were reportedly killed in the action. Read on.