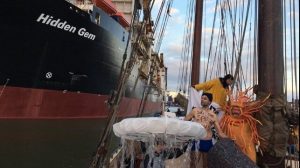 Timed to the opening of the One Ocean Summit being hosted in France this week, environmental activists are staging a series of events to call attention to their demands for an international moratorium on deep-sea mining. Greenpeace is planning a demonstration at the conference in Brest, France for later this week, while yesterday in Rotterdam activists again targeted a vessel being outfitted at the port for deep-sea mining operations.

The One Ocean Summit began today in Brest, France hosted by French President Emmanuel Macron in his role leading the Council of the European Union, and with the support of the United Nations, and attended by representatives from nations around the globe. The goal of the summit is to raise the collective level of ambition of the international community on marine issues and to develop tangible commitments for the global responsibility to the ocean as part of a year-long initiative designed to develop commitments to protect the ocean and reverse its declining health. Read on.