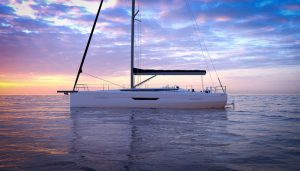 Elan Yachts’ E-Line range of performance cruisers has a brand new flagship. It’s been about five years since the last new model in the range was launched and the core concept has been significantly refined.

So what’s new? Well, for starters Elan has set itself a very ambitious goal indeed: the new E6 is intended to be the fastest, lightest and stiffest 47ft production cruiser-racer on the market with a fully fitted interior. And as if that wasn’t enough, they’re also competing very strongly on price in a market segment that’s already crowded with well-established and highly regarded competitors.

‘We’ve been in this space since the 1980s and this is an evolution of our successful E-Line concept, not a redefinition,’ says Elan’s head of marketing, David Rajapakse. ‘In a way it’s back to our roots, because performance cruising is a fundamental part of Elan’s DNA. This is what Elan is historically known for. Our build quality is boutique-like, but this yacht also offers a different kind of performance – price performance. And we’re taking it to a whole new level in terms of design, technology, styling and usability. The racing version of the new E6 aims to be the fastest Elan ever and its aesthetics will be pushed to the next level by Pininfarina.’