On the question of outriggers and RRS 50.3 as discussed in our SA forums… 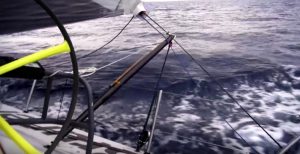 The first thing to recognize is that RRS50.3 is old money, in other words, the rules prior to 1st January 2021 which specified the use of an “outrigger”.

The latest version of the rules (2021-2024) has tidied up the language while perhaps intended to close any loopholes and states ‘any device’ that takes the sheet lead outside a vertical line drawn up from the hull or deck when the boat is upright other than to a boom that is “regularly used for a sail and is permanently attached to the mast” or a whisker pole which by definition is a spar temporarily fixed to the mast.

So, unless altered by further rules “any device” (formerly outriggers) is NOT allowed.

My understanding is they are generally not allowed in ordinary round the cans acing as they add significantly to a boat’s beam in a way that is not normally intuitive for a helmsperson to allow for the bit of tin or carbon sticking out the side of the boat especially at turning marks. So largely a safety thing. (in my interpretation)

Varan’s post of Aug 8, 2019 correctly quotes the SI’s for the VOR which doesn’t allow outriggers until such marks have been passed, last thing you want at the start of a multi-thousand-mile leg is carnage at the first mark.

Although it is a rule, if one refers to RRS86.1 which lists those rules which cannot be changed you will not find RRS50.3 listed disallowing any changes. Any changes to the RRS which are allowed SHALL be included in the NoR (RRS J1.2(2))

So yes, 100% allowed but sometimes Race Committees forget to detail the changes to a rule in which case, because of the word “SHALL” in RRS J1.2 the rule is unaltered. A notable case recently is the Middle Sea Race RC DID NOT include an changes to RRS32 in the NoR or Sis which meant, by the rules, RRS32 remained on – and we all know the clusterfuck that caused.

A search of the 2021 IRC Handbook resulted in no specific mention of measurement requirements of a “Outrigger”. – SS

Jump in if you wish.