vaginas are a thing 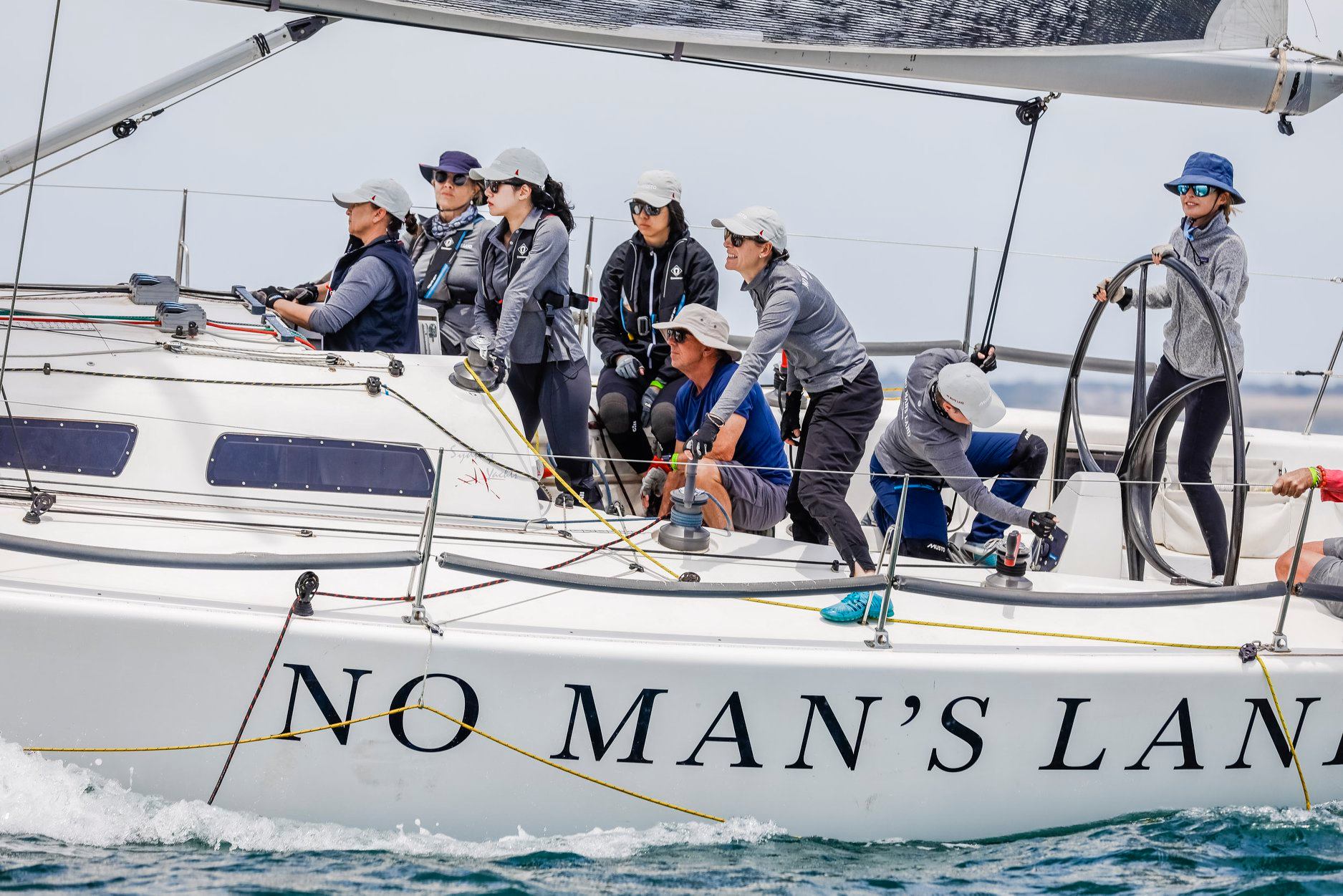 In the words of Betty White: “Why do people say, ‘grow some balls’? Balls are weak and sensitive. If you wanna be tough, grow a vagina. Those things can take a pounding.”

I could say, I’m glad I have one. But I wish vaginas weren’t a thing. I just wish talent, commitment and passion spoke volumes and earned respect. I want to qualify this statement – of course, I am surrounded by positivity and support. I seek out mentors and help from men who are gracious and willing to share their eons of sea wisdom.

But outside of this small circle, why are instant and common reactions from male skippers, to a female helm, defensive and shitty? Change requires change. When it comes to dialing up female participation, it’s really simple, we need to dial down sexist comments and actions.

Please don’t tune out. Tune in and read on.

NO MAN’S LAND is my Sydney 38. Thanks Ed, for putting it out there, and thanks for sharing in this convo. I’m aware if you call your boat NO MAN’S LAND, you’re asking for comment and with a bit of luck, an open-minded conversation. This was my intention, so let’s debate it.

Is sailing the world’s greatest sport? I truly believe it is. I love sailing boats. Racing is even better. I’ve drunk the Kool-Aid and bought the t-shirt, but Houston, we have some issues.

Most sexist sport? Perhaps running a close second to topless mud wrestling. When it comes to dysfunction, does the sport of sailing attract more assholes than any other? WTF? Are these points we even want to debate because, as sailors, we have a choice.

As Skipper of NO MAN’S LAND, I’ve had some interesting comments thrown at me. I’ve been told to rename the boat to Waste Land, because a boat like that is wasted on a group of women. True story.

Or, just this weekend, at the Festival of Sails, when in super light conditions, sailing on starboard, a boat tacked in front of us, on to Port, without enough speed to pass my bow. As Skipper, I called starboard before altering my course. I was then instructed, not by the Skipper of the boat in question – who remained silent, but by one of his crew, who shouted out across the water, careful not to drop his Bundy and coke – ‘Would you stop squeaking. All we can hear is squeak, squeak, squeak.’ The chorus rose with the others in the same crew, all blokes – joining in. It got louder. The Skipper remained silent. Solid example of fearless leadership.

These are but two of the many I’ve happened to hear.

In questioning the above I’m often told, ‘Well that’s just sailing. You have to suck it up’, or ‘It’s not because you have tits, they treat everyone like that’. So then the logic goes that this kind of behavior is okay, it’s acceptable, it’s just part of the sport. In not actively doing anything to change, tits or no tits, we are telling the world it’s okay to abuse fellow competitors, while out on the water, enjoying a weekend hobby.

So ask yourself this – as a sport, is asshole behavior okay? Does it make us proud? Do we accept this level of dysfunction or do we work towards a policy of Zero Tolerance on bad behavior? Ironically, if you chose to take a formal stance, your best option happens to be called Rule 69.

My aim with NO MAN’S LAND is to give women the confidence to get out there and ‘own space’ on the water. It’s not about being an all-female crew. It’s go nothing to do with gender anger. It’s about passion, encouragement, talent, commitment, merit and equity.

NO MAN’S LAND sometimes races as a mixed crew. As a Skipper, I have built a team of people who don’t see gender. The pic – of which I must say, I’m super proud – shows one bloke who sailed with me at the Festival of Sails – we had four in total – and it was brilliant.

Sydney 38’s don’t rate brilliantly in a mixed fleet so our aim for this regatta was modest. Five races over four days and we improved in each but it was after race 4 where I experienced a moment like none other. We had done bloody well and as we came back into harbour, Bruce Taylor, off-shore legend (CHUTZPAH Winner of IRC Div 2 Sydney-Hobart 2021 and former owner of my boat) doffed his hat and clapped us in. I was elated.

That there is the reason why I sail, not to prove anything to anyone, other than to myself and then in leading by example, to encourage more women to step onboard.

Thanks for reading. – Sal Balharrie.

“Tomorrow, I Love Ya”