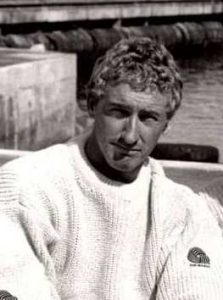 When Bruce Deeter walked into a room, women swooned and men wanted to be him.

A white-hot talent, Bruce made a mark in the Maxi boat fleet and America’s Cup. A journeyman carpenter from Lancaster, California, Bruce joined the Kialoa program with no offshore experience but rapidly grew into an essential part of the crew. From Kialoa, he joined Dennis Conner and the Stars & Stripes crew when they successfully recaptured America’s Cup in 1987 in Perth, Western Australia. He served in the ’92 campaign with Il Moro di Venezia and again with Stars & Stripes in ’95 managing the rig programs.

Bruce was talented at everything he touched. His intellect, physical prowess and engaging personality made him universally beloved and revered. Bruce was the source of many great adventures and shenanigans. His mischievous smile and escapades both on and off the water were the stuff of legend.

In 1986, the entire team was longboarding Stars & Stripes ’85 in the scorching Hawaiian sun. Bruce rocked up about half-past one in the afternoon only to meet the wrath of our crew chief. We put down our longboards to watch (this was a shootout at the OK Corral drama) and heard Bruce, “Bill, you’re paying me what $10 dollars a day? Pay me six today and we’ll call it even.” The entire compound erupted in laughter, even Bill managed a smile as Bruce and his mystical charm diffused the situation.

Bruce Deeter was a dear and cherished friend. He is survived by his brother Alan and Alan’s family.

We wish you peace dear friend.