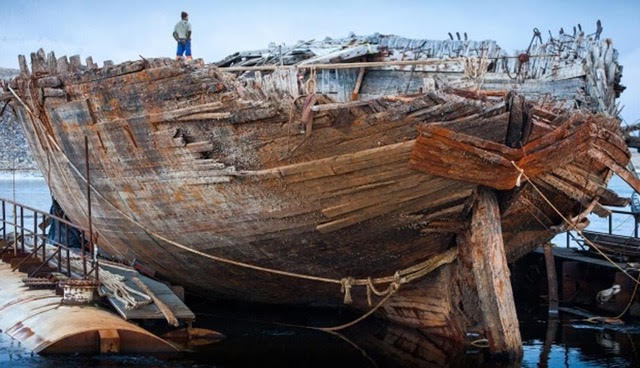 The ship used by Norwegian explorer Roald Amundsen has finally returned to Norway, his home country, a hundred years after setting sail for the North Pole, the director of the repatriation project announced.

The Maud, a robust three-masted sailing ship, a valuable relic of the Norwegian polar expeditions, was refloated in 2016 after spending 85 years under the waters of northern Canada, where it sank in 1930.
After leaving Greenland, the wreck was towed across the North Atlantic on a barge and arrived at the port of Bergen in western Norway.

“The trip was long but it was good,” the director of the operation”, Jan Wanggaard, told AFP. Thanks to the financing of three brothers and Norwegian businessmen, the Maud will be exhibited in the municipality of Asker (southeast), near Oslo, where it was launched in 1917. “Roald Amundsen is an important historical figure in Norway,” explained Wanggaard. “We want to tell the story of this expedition to the Norwegian people,” he added.

Amundsen, who was the first to reach the South Pole in 1911, wanted to use the Maud to study the Arctic Ocean with the intention of getting stuck in the ice and drifting across the North Pole.

The expedition launched in 1918 especially made it possible to explore the Northwest Passage, providing a great deal of scientific results, but Amundsen’s financial bankruptcy caused him to sell the ship to the Hudson’s Bay Company in 1925. Renamed “Baymaud”, the ship sank five years later off the shore of Cambridge Bay, in the Canadian territory of Nunavut.

The ship, an old glory from Norway, has been refloated in Cambridge Bay, in northern Canada, and next summer it will be towed to its country of origin.

Its oak hull, solid and circular, was designed to resist the pressure of the ice. Norwegian explorer Roald Amundsen, who died in the Barents Sea in 1928 while flying a rescue operation in the Arctic. His body was never found.

The Maud, named after Princess Maud of Wales, who was queen consort of Norway, sailed from Vollen in 1917 with the purpose of crossing the Northeast Passage, the sea route that joins the Atlantic Ocean with the Pacific through the frigid waters of the Arctic. The Maud set sail for the Arctic almost a hundred years ago and since then a lot has happened, the world has undergone a lot of change.

He sailed to the Arctic on a scientific expedition to reveal the still hidden secrets of the North Pole.
Some of the men on board later became internationally renowned scientists and the scientific results derived from the expedition were groundbreaking at the time,” says Jan Wanggaard, project manager for the Maud recovery.

Norway wanted to recover one of its old glories, hence the effort shown in recent years to revive the Maud.
The first part of the Maud Returns Home project culminated in rescuing the old ship from the depths, after cleaning its interior, full of mud and debris.

The second part of the project consisted of towing the Maud to Norway, where it can be seen in a specially built museum, like the one that already has the Fram, the mythical ship of Fridtjof Nansen’s expedition to the Arctic.