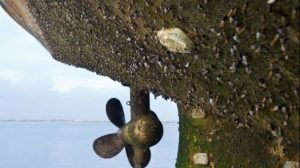 In a new study published Monday, a group of researchers from the University of Cambridge and the British Antarctic Survey report that Antarctica is at risk of experiencing some of the same marine invasive species problems found in large seaports around the world. Ship traffic is on the rise around the frozen continent, and each vessel carries the potential to deliver new, foreign marine organisms into isolated Antarctic ecosystems.

The authors noted that Antarctica is connected to all regions of the globe via shipping activity. Fishing, tourism, research and supply ships transit to the continent from more than 1,500 ports around the world. Based on satellite AIS data of ship traffic passing south of 60 degrees S, vessels were found to sail most frequently between Antarctica and ports in South America, Northern Europe, and the western Pacific Ocean.

While some of these vessels stop off at five “gateway” ports and get their hulls cleaned before traveling further south, many do not – bringing new species of mussels, barnacles, crabs and algae with them.  Read on.

this is what you want…