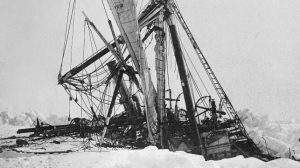 Explorers are preparing an epic expedition in the Antarctic to find the wreck of Sir Ernest Shackleton’s Endurance, the ship that disappeared under the ice in the Weddell Sea in November 1915.

The Falklands Maritime Heritage Trust (FMHT) has announced that come February 5, a team of polar explorers will embark on another mission to locate the famous wreck. The expedition, dubbed Endurance22, comes one month after the 100th anniversary of Shackleton’s death on 5 January, 1922. The British Antarctic explorer led three expeditions to the frozen continent, playing a central role during a time that was in later years called the “Heroic Age of Antarctic Exploration.”

Endurance was one of two ships used by the Imperial Trans-Antarctic expedition of 1914–1917, which aimed to make the first land crossing of the Antarctic. In January 1915 the ship became trapped in the ice, stranding Shackleton and his 27-member crew. Read on.

birds of a feather