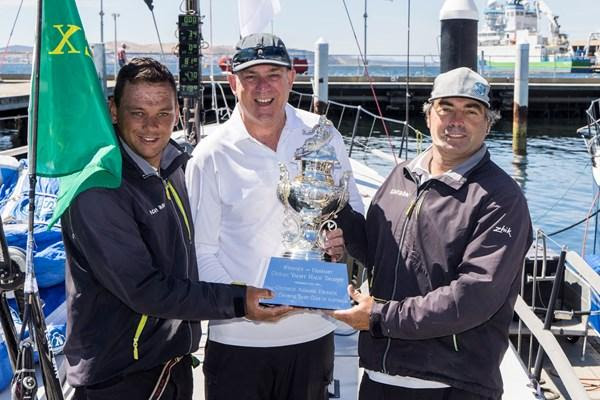 The story so far: Two days ago Celestial looked to be the provisional winner of the 2021 Sydney-Hobart. Then the Race Committee protested and Ichi Ban requested redress.

Both applications were upheld by an International Jury. A penalty relegated Celestial to second place and Ichi Ban was presented with the overall winner’s Tattersals Cup trophy. Unfortunate, but that’s the way the big boys go boat racing.

Celestial then lodged a request for the International Jury to reopen the protest hearing on the basis of what they believed to be fresh and relevant evidence. So the Jury and interested parties all re-assembled today in the boardroom of the Royal Yacht Club of Tasmania to consider this increasingly acrimonious dispute.

Their first new claim was an explosive allegation that the chairman of the original protest hearing had once had dinner with Ichi Ban skipper Matt Allen and that this, therefore, constituted a conflict of interest.  The chairman immediately stood down while that allegation was considered but the Jury did not agree that there had been any conflict of interest under the applicable RRS rules (61.1b, 63.4 and 66).

From that point, Celestial’s case for a re-hearing dealt in apparent obscurities.  They tendered photographic evidence that the red protest flag flown from Ichi Ban’s backstay may not have been fully unfurled.  They argued that there had been SatPhone issues throughout the fleet.

They submitted that an inspection of the masthead antenna on Celestial after the race showed that it was connected by “one thread” and that this might have hindered their ability to receive VHF transmissions.

All very inventive stuff, but the Jury rejected the lot and declined to re-open the protest. Their original findings and penalties stand. Case closed.

But what a pity that such a tough, long and exciting race is likely to be remembered more for this bitter protest controversy than for the quality of the sailing. It leaves a sour taste for everyone involved.

Sadly, the records books will now have to annotate the results of the 2021 Sydney-Hobart with a footnote to explain how the initial corrected finishing time positions of Ichi Ban and Celestial came to be reversed. The wording might be something like:

Ending on a brighter note, three cheers for the mighty Solveig, the last yacht home. She crossed the line off Battery Point early this morning. The 36-foot timber sloop was built in 1950 and won line honours in the 1953 Sydney-Hobart with an elapsed time of 5:07:12, then took the handicap prize in 1954.

Sixty-seven years later her elapsed time was 5:19:40, but surely we can forgive the old girl for having slowed a little with age.