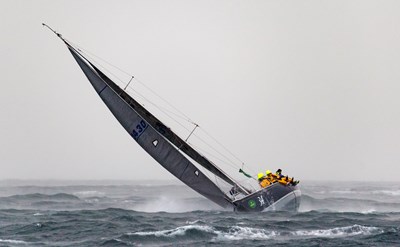 It can be a cruel way to spend your Christmas holiday.

With the fastest few boats now finished and snug alongside, the rest of the Sydney-Hobart fleet can start worrying about when they’ll need to cross the line to score a podium place on handicap.

Sailing against the clock in the frustrating conditions down the Tasmanian coast, across Storm Bay and up the Derwent River can be a protracted agony.

The race website, which is accessed by all competitors within internet range, helpfully now includes a “time to beat” calculation for every yacht still at sea with winning ambitions. Often those targets can seem out of reach but in this year’s slow race the possibilities are tantalizing.

Some of the TP52s have already finished. Ichi Ban beat Celestial home by 17 minutes but ended up a frustrating 3 minutes behind on IRC corrected time. Skipper Matt Allen’s hopes of a ‘three peat’ Hobart victory will now have to wait until next year.

Pictured above, and currently leading on IRC is the S&S34 Azzurro, one of the smallest yachts in the fleet. To win they’ll need to finish before 07:00 on December 31. With 200nm to go that’s a distinct possibility.

In second place (and only 21 miles closer to Hobart) the much larger veteran S&S Love & War would have to cross the line about 10 hours earlier, which is a more difficult challenge.

Bringing up the rear is Gun Runner, the tiny 1984 sloop owned by the Army Sailing Club and crewed by service volunteers with minimal offshore experience. They race to instill values of “courage, initiative, respect and teamwork”.  They might need all of those qualities. The boat still has 400 miles to sail and isn’t expected in Hobart before late on January 1.

the new standard Grassroots coverage of sailing has hit a new high this week with the SAP 505 World Championship in Hamilton Island, despite multiple days of blowouts and even todays racing seeing blinding rain in 15-20 knots of breeze.

have a hobie day?