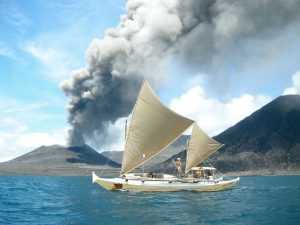 We are very sad to announce that on the 14th December James Wharram left this earthly world, joining Ruth, Jutta and his many close friends that departed before him. At 93 years old his spirit has set out on the voyage to sail the oceans of heaven.

James was a trailblazer, a fighter with great determination and vision. From a young age he followed his passions – to roam the hills – for fair politics – for intelligent women – to sail the seas – to prove the Polynesian double canoe an ocean worthy craft – to become a Man of the Sea.

These passions made him into a pioneer of catamaran sailing and a world-renowned designer of unique double-canoe catamarans that now sail the oceans. He designed for people who wanted to break out of mundane lives, gave them boats they could build at an affordable cost and gave them the opportunity to become People of the Sea like himself.

His chosen life was never easy, he would always fight convention and conventional thinking head on. His passionate and multi-faceted personality was very attractive to strong, independent women who helped him in his pursuits, starting with the steadfast Ruth, without whom he would never have reached his goals. Young Jutta joined them on their pioneering ocean voyages and was the mother of his first son. Sadly she died very young from mental illness as a result of her traumatic WWII childhood experiences. Read on.