a fraction too much friction 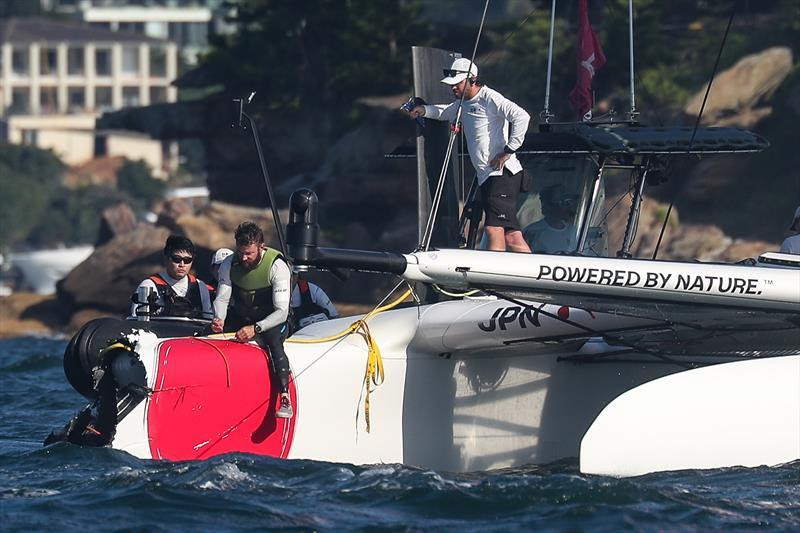 Sydney, Australia – SailGP supremo Larry Ellison has announced major changes to the format of the event following the two-day series just concluded in Sydney. The new rules apply immediately and are the conditions under which the final round will be sailed in San Francisco on March 26-27.

Speaking to the media before boarding his “Powered by Nature” private jet for the flight back to the US, Ellison conceded that the radical changes to the SailGP format were a response to general disappointment with the series so far.

“The same few boats win all the races”, he said “and no matter which country they’re supposed to be representing they’re all sailed by Australians anyway. The only exciting moment was when the UK boat smashed into Japan and ripped the bow off one hull. TV replayed that 37 times from six different angles.”

But that incident sparked an idea in Ellison’s ever-fertile mind. “It was my ‘Eureka!’ moment – like Archimedes in the bath. If a collision is the only thing to get people interested in the event, then why not make it all collisions? Let’s have an old-fashioned Demolition Derby on water at 35 knots!”

The new rules will replace the $1m ‘Winner Takes All’ prize for the final series in San Francisco with a ‘Last Man Standing’ award. All eight carbon-fibre catamarans will be encouraged to smash into each other while racing until only one survives to sail over the finishing line.

“It’ll be fantastic!” said Ellison. “Seventy years of NASCAR made Petty, Yarborough and Earnhardt into household names. We can do the same for Slingsby, Spithill and Sir ‘Fender Bender’ Ainslie. TV will love it.”

SailGP co-founder, Russell Coutts, confirmed that there would have to be some minor amendments to the Racing Rules of Sailing to accommodate the new format.

“Obviously, port and starboard will have to be repealed (2.10)”, he said “along with the windward boat keeps clear rule (2.11). Of course, it goes without saying that Rule 14 (Avoiding Contact) won’t apply, nor will 17.1 (Proper Course).

“Actually, when you come to think of it, there won’t be any rules at all so we’ll save a fortune on umpiring.”

Wall Street has also welcomed the new format. They point out that SailGP’s hefty losses have been depressing the ORACLE stock price for years.  Analysts say that after the San Francisco series Ellison should be able to make a full insurance claim for the smashed-up boats, then write their value off against profits for a substantial corporate tax reduction.

The above is obviously and clearly parody.