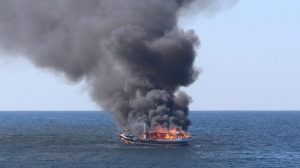 U.S. Navy patrol craft USS Sirocco came to the aid of a burning fishing vessel in the Gulf of Oman rescuing five individuals. On closer investigation, the U.S. Navy reports that the individuals were Iranian citizens and they were smuggling drugs at the time of the incident.

The USS Sirocco was on a counter-narcotics patrol in the Gulf of Oman on December 15 when sailors aboard the American vessel observed the mariners in distress aboard what appeared to be a burning fishing boat. The U.S. Navy came to the assistance of the small craft noting that they have observed an explosion aboard the vessel caused by the fire.

Before the fire, international maritime forces had identified the vessel on suspicion of transporting illicit drugs. Suspecting that they had been spotted, the people on the fishing vessel are seen in a video released by the Navy pouring fluid over parts of their cargo. The U.S. Navy is now speculating that the crew attempted to burn their cargo and that the fire spread to the vessel. Read on.

where are your papers?