it isn’t our fault 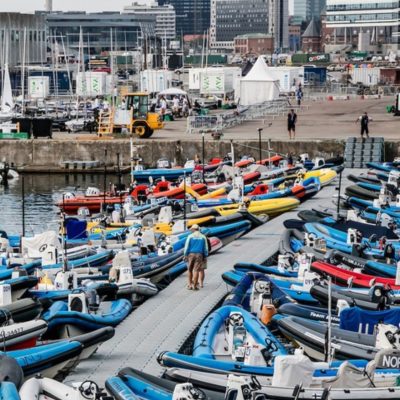 At the recent Sailor of the Year awards, a third award was given for sustainability and while it is an admirable initiative it is unlikely that World Sailing itself would be on the shortlist.

With the world in crisis due to too much carbon going into the atmosphere and too much plastic and other pollution going into the oceans it was good to see World Sailing taking a small step with Rule 55 a couple of cycles ago (now Rule 47). Coach boats at the 2018 Sailing World Champs, pictured here.

Meanwhile with some taking pots at the oil companies, and of course they have a responsibility, but it is so easy to shout at big corporate while still buying their product, taking the gas guzzler to the supermarket or the kids to school while the kids – some more vocal than others – blame the last generation or two for creating the problem.

I have seen it before, we used to eat fish & chips from yesterday’s newspapers, take the soda or pop bottles back for the penny on the bottle – take 12 and you got a full one in exchange. Our mothers used to rinse the milk bottles and leave them out for the milkman and so on and so on.

It is so easy to blame someone else while we partake of our environmentally friendly sport – if of course one discounts the number of hydrocarbons that went into the hulls and sails, or how much electricity was used to smelt the aluminum for our masts.

We cannot undo those elements but while World Sailing pats themselves on the back for Rule 47 and pretending to be green our sport still allows the massive use of petroleum products on the racecourse.

Use rubber bands on your spinnaker and you could be protested while at many – actually let’s say most – major dinghy regattas the number of coach boats (I include the ubiquitous “Oppie Mums” in this number) almost seem to outnumber the number sailing boats on the water.

At idle they are putting the exhaust from 1-2 liters of fuel an hour into the water, start buzzing about and that could rise to 5-20 liters an hour and that doesn’t even include the rainbow water when they inevitably spill unburnt fuel from a haphazard refueling in a hurry to get out for the next race.

Are coaches really unable to impart enough into their charges before they go down the launching ramp? And can’t parents let their offspring out on the water without following them there in a RIB?

If we really want to do something that shows we are ‘green’ and actually give a damn about our playground perhaps a good first step would be to somehow reduce the amount of “support craft” that seems to surround every major dinghy regatta in the world.

As I say, it is always so easy to talk about and blame someone else but isn’t it time we looked at our own backyard?

unlike trump, we apologize