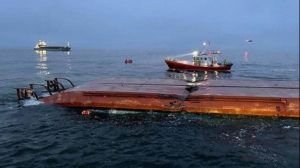 Swedish and Danish authorities launched a search and rescue mission overnight after two general cargo ships collided and one capsized in the Baltic south of Sweden. One crew member from a Danish vessel was killed and another was missing while Swedish authorities said they were investigating charges of gross negligence and drunkenness among the crew on the British vessel.

The Swedish Coast Guard, Maritime Administration, and Sea Rescue Society coordinated in their efforts sending nine vessels into the area and a helicopter after receiving reports of the collision at approximately 3:30 a.m. local time. The collision took place in a busy sea lane south of the Swedish town of Ystad and the Danish Island of Bornholm. At the time, there were reports of patchy fog but calm sea conditions. Read on.