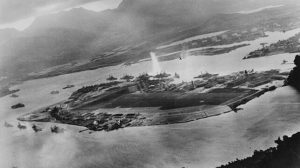 In his war declaration speech, President Franklin Roosevelt labeled Dec. 7, 1941, as a “date that will live in infamy.” On that day, without forewarning or a declaration of war, forces of Imperial Japan attacked the U.S. Pacific Fleet at Pearl Harbor, Hawaii. In the battle, Coast Guard units served alongside the Navy firing anti-aircraft barrages against the Japanese attackers and performing harbor and anti-submarine patrols.

Coast Guard radiomen George Larsen and Melvin Bell manned the communications station at the Diamond Head Lighthouse broadcasting that an attack was underway. Coast Guard aviator, Lt. Frank Erickson, who later pioneered helicopter flight, was standing watch at Ford Island before the attack and then took command of an anti-aircraft battery, fighting off enemy aircraft. Read on.

when it absolutely, positively has to be there…

the cup is dead. long live the cup!