to infiniti and beyond? 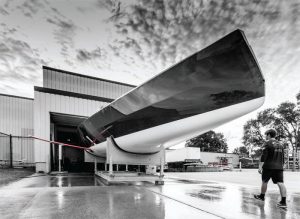 The first Infiniti 52 has sea trialed in the UK before heading south through Biscay as part of its training program and its first race in January 2022, the RORC Trans-Atlantic Race. Joint developer of the DSS patent and founder of Infiniti Yachts, Gordon Kay talks us through the gestation of the genre-defining project.

The boat will have to be trucked from Composite Builders in Holland, Michigan to Baltimore and then shipped to Southampton, where the team at Racetec Rigging will carry out the final fit-out and commissioning in conjunction with Infiniti Yachts.

There is always a level of trepidation when the light appears at the end of the tunnel; the possibility that it is an oncoming train is never far from one’s thoughts. Fortunately, emerging from the tunnel is a build that, in spite of an awkward global situation regarding supply chains, has hit all the targets it set out to achieve. It took a little longer, cost a little more and redefined and refined itself but it has so far nailed all the goals we set for ourselves at the outset. Read on.

east bound and round