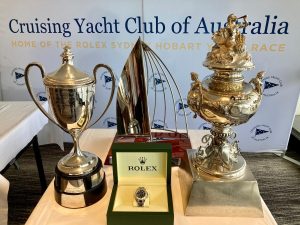 The media launch before last year’s Sydney-Hobart Race had a mood of guarded hopefulness. Then a resurgence of Covid-19 in Australia forced the cancellation of the annual event just days before the traditional December 26 start – the first time in 75 years there hadn’t been a race.

Twelve months later, today’s launch function at the Cruising Yacht Club in Sydney was altogether more positive. The dreaded Coronavirus is under control in New South Wales (the state where the fleet assembles), and Tasmania (the state where they finish).

CYCA Commodore Noel Cornish was happy to acknowledge his elation and relief that – barring any last-minute catastrophes – there would be a race. “It’s on for young and old!” he told the assembled media.

106 yachts have entered, ranging from three 100-foot supermaxis to a boat whose LOA is right on the minimum limit of 30 feet.  Around one-fifth of the fleet – 20 yachts – will compete in the two-handed divisions. (As yet, the race rules do not accept the 2-up brigade in the main ‘fully crewed’ IRC, ORCi and PHS divisions, although this restriction is under review for the 2022 season.)

One of the unforeseen consequences of the extended Covid lockdown period in NSW was that two-handed sailing was permitted but no boat could sail with three or more crew.

As a consequence, two-time winner and ‘defending champion’ the Botin 52 Ichi Ban didn’t go sailing for eight months. Owner/skipper Matt Allen admits his team is “a bit rusty” but expects to blow out those cobwebs in the Cabbage Tree Island Race that precedes the Hobart.

Asked what it takes to win the 632-mile classic he said, “You need everything to go right – and then you need a bit of Lady Luck.”

The main pre-Hobart dockside talking point has been the newly-extended bowsprit on the 100-footer LawConnect (formerly InfoTrack). “When it comes to bowsprit, size does matter”, quipped owner Christian Beck. He believes the new spar will allow the boat to carry 15% more sail area, particularly in reaching conditions.

Beck finished just 44 minutes behind Comanche in the 2019 race. This year neither Comanche nor Wild Oats XI have entered, but Black Jack and Scallywag will provide plenty of competition in what has been described as “the last hurrah” of the supermaxis.