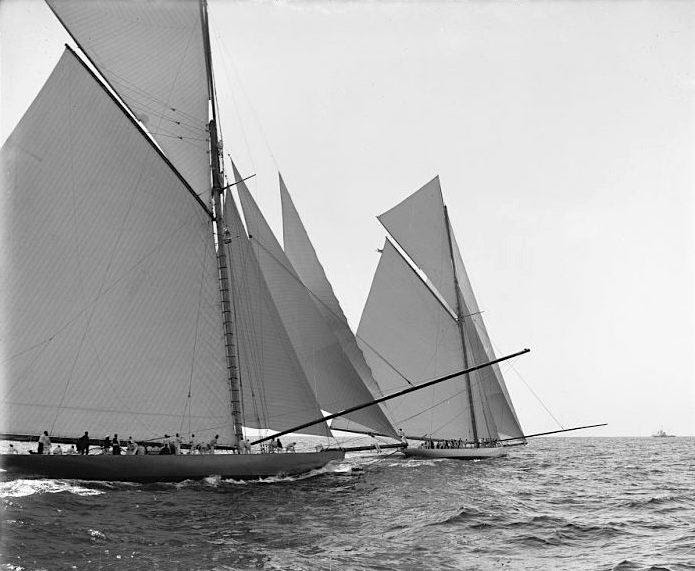 We should have anticipated that the dockside pundits and yachting media would immediately sink into the labyrinth of Class Rules and Protocols released last week for the 37th America’s Cup. Everyone’s an expert; everyone can speculate about how the next series will unfold; everyone knows everything – or nothing.

What has been missed in all this fluff about shared technology, gender diversity, youth participation and cost reduction is something far more significant: the deal between the New Zealand defenders and the UK Challenger of Record for AC37 has amplified the creeping monoculturalism of the whole AmeriCup circus. The field of play has now been deliberately narrowed to favor a self-chosen few.

Here’s a comparison to illustrate. In 1987 there were six nations competing just for the right to challenge the Australian defenders. That extended regatta had no fewer than six teams from the USA, two each from Italy and France, and one from Canada, England and New Zealand. A spectacular fleet of more than a dozen visiting 12 meters was actively racing in the waters off Fremantle, along with six Australian boats from four defender syndicates.

The contrast with today’s America’s Cup is stark. We can reasonably assume that the teams from England and New Zealand (who agreed on the Class Rules and Protocols between themselves and are unlikely to have put each other at a disadvantage) will dominate in 2024.

It is difficult to escape the impression that Ainslie and Dalton would not be unhappy if other potential participants felt intimidated. Despite all the lofty media-release rhetoric, the expense and complexity of any serious campaign is undiminished and daunting. INEOS and ETNZ have forged their own exclusive culture.

So it’s no surprise there’s hardly been a rush of enthusiasm from the likely challengers. The Italians certainly mounted a strong campaign in Auckland but have been virtually silent ever since. American hopefuls seem to talk as if they want to be major AC players but their language remains timid. Rumors of a re-born Alinghi team abound, yet so far the Swiss haven’t put their heads above the parapet.

The reasons for this reluctance to commit seem obvious to any dispassionate observer. Here are a few:

*  The promises of cost reduction are patent nonsense. No America’s Cup series in the modern era has been cheaper than the previous one. It might be easier to believe this claim if the current team leaders and professional staff all announce a voluntary reduction in their handsome salaries.

*  The required participation in youth and womens’ AC regatta programs is motherhood tokenism. When the chips are down at this level it is crew strength that counts – grown men at work – in every position other than, possibly, at the helm.

*  The promise to encourage participation by “emerging nations” is either a crafty loophole to get around crew nationality rules or pious piffle. The majority of second and third-world nations are either land-locked or have minimal sailing opportunities. Only a privileged few could waste their time and money on a billionaire’s boat race.

*  The stipulation that two chase boats must be hydrogen-powered is hypocritical, sham environmentalism. Even if these (still theoretical) craft could keep up with the AC75s at full speed, their carbon footprint saving would be minuscule against the millions of gallons of aviation fossil fuel burned by the competing syndicates during their three years of international travel.

Meanwhile, we should brace ourselves for the inevitable bickering and legal challenges launched by any team brave enough to confront INEOS and the Kiwis about their restrictive Protocols and Class Rules.

The late Olin Stephens, who probably fought more rounds in the America’s Cup ring than anyone, was well aware of how damaging these disputes can be. Writing about the wrangling between the British and the New York Yacht Club before the first formal challenge back in 1857 Stephens reckoned that “The difficulty of reaching agreed terms may be seen as an omen for the frequent problems in arranging and applying conditions for so many of the future matches”.

How right he was, and still is. – Anarchist david

sailing the seas of shit