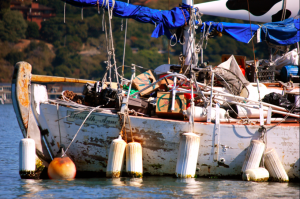 We are torn on this issue. We have a similar, but less intense situation in San Diego.  There are a whole lotta boats in near-total disrepair with owners who appear to be barely getting by.

A few of them come anchor in La Playa Cove between SDYC and SWYC for 72 hours to get away from the rolling, bumpy existence at anchor or on moorings at various designated anchorages in all of San Diego Bay.

Many run their generators at all hours, have non-stop barking dogs, etc. One has to wonder how many of them have holding tanks – our guess is not that many – so pollution in this tiny area of water is a concern.

But, they have a right to be there and who the hell are we to judge their quality of life? It’s the things I have mentioned above that are issues that piss some of us off. – ed.

Greg Baker likes to say that the only way he’s leaving his home, a broken-down 40-foot sailboat anchored in this sparkling estuary north of the Golden Gate Bridge, is in handcuffs or a black plastic bag.

“I like the peace, the quiet — if I stub my toe I can holler,” said Baker, who at 82 has been living here, in one vessel or another, for half a century.

Lately though, life has been anything but peaceful on the bay. Baker and his fellow anchor-outs, as they’re known, have long lived illegally and rent-free in the sightline of some of America’s priciest real estate, and now authorities in Sausalito and other neighboring communities want them gone. The battle has pitted the forces of gentrification against Sausalito’s fading identity as a freewheeling maritime town that has always been a refuge for rebels and dropouts.

Around 90 vessels in various states of disrepair bob amid the seagulls and paddle-boarders. To the flinty salts who occupy these rusting tugboats and de-masted sloops, Richardson Bay is sacred, a last bastion of living free on the water in a Bay Area of Apple Stores and $3,000-a-month studio apartments.

Read on, thanks to the LA Times.