which way to go? 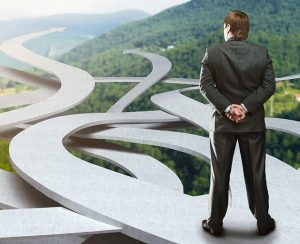 On 16 September 2021, the World Sailing Judicial Board handed down the decision in the matter of Mr. Murray Jones v The Race Officials Committee.

The Judicial Committee set aside a penalty imposed against Mr. Jones by the Race Officials Committee in January 2021 which adopted the earlier findings of the Investigation Panel.

Mr. Jones was exonerated, and the penalty of a reprimand was set aside.

However, the controversy raises important issues as to the conflict between World Sailing Disciplinary Regimes and the Affiliated Clubs administering their own member conduct rules. Central to the controversy was Mr. Glen Stanaway who is the Head of Governance, Rules and Safety of Australian Sailing.

On 2 August 2020, in a Combined Club Winter Series race organized by the Royal Yacht Club of Tasmania (RYCT) a collision occurred between the yacht Kraken and another boat in the same race.   A protest hearing was held and the protest was dismissed as the other boat had already taken the appropriate penalty by retiring.

Kraken at the time did not seek redress and time otherwise expired for doing so.  On 16 August 2020, and shortly after the start of Race 3 in the series, a request for redress was submitted on behalf of Kraken in respect to the incident in Race 2.

After the hearing had concluded, the Judicial Committee found that an exchange then took place between Mr. Jones and Mr. Stanaway along the following lines:

“That is the end of formal proceedings and as far as the appeal goes, I do want to say something to you. It is not my usual practice to deliver a sermon after a protest hearing, but for you Glen I am going to make an exception. Someone in your position should have known that this request had no possibility of being granted. That you have chosen to waste the time of volunteers with such a frivolous, fatuous and vexatious request does you no credit.”

The consequences of that exchange gave rise to the uneasiness and indeed incompatibility of Club disciplinary procedures and those under the World Sailing regime.  It would seem the first step taken by Mr. Stanaway was to complain to the RYCT under its Constitution for a breach of the RYCT General Code of Conduct by Mr. Jones.

The RYCT Disciplinary Tribunal found that the complaint by Mr. Stanaway was inconclusive and certain allegations were found to be unsupported.  RYCT concluded there was no breach of the General Code of Conduct, and no further action was taken.  One would think that should have been the end of the matter.

However, on 2 September 2020, the Race Officials Manager at World Sailing informed Mr. Jones that it had received a complaint from Mr. Stanaway under Regulation 32.  Regulation 32 allows complaints to be made against race officers on the complaint of, amongst others, a competitor or national member authority.

It is unclear in which capacity the Regulation 32 complaint was lodged whether by Mr. Stanaway as a competitor or by the National Member Authority.

Nevertheless, the Race Officials Committee adopted the recommendation of the Investigation Panel and imposed the reprimand.  Not surprisingly, Mr. Jones appealed, and the matter became before the World Sailing Judicial Board.

While the Judicial Board were careful to point out to say that it was considering whether the proper process had been followed by the Independent Panel, it did observe:

“The independent panel believes it is not reasonable for the IP to rely wholly on the investigation done by another organization under a different Code of Conduct.

Moreover, the RYCT decision found with respect to Mr. Jones the complaint was inconclusive and held that Mr. Jones committed no breach of the RYCT Code of Conduct.”

The real question here however is why did Mr. Jones have to fight two prosecutions?

Why should there be a complaint under a club code of conduct, and at the same time a Regulation 32 complaint against Mr. Jones as a race officer where Mr. Jones would be forced to defend himself in two forums with the obvious risk that two different sets of facts could be found, and different penalties imposed?

Indeed, that is what has happened in the present circumstances.  By contrast, a well-known incident at the conclusion of an ocean race where after an on-water incident, post-race drinks descended into a melee, the RRS 69 complaint was made, a person appointed to investigate, and a three-member panel appointed to determine the complaint.

However, when it became obvious that the conduct of race officers and senior members of the Organising Authority would be in issue, the RRS 69 investigation was abruptly halted and never concluded.

Some but not all the pugilists were then dealt with under the Constitution of the Organising Authority and some completely inadequate sanctions were imposed against all but one participant.

Now consider some other hypotheticals.

An International Judge is made bankrupt because of the non -payment of tax. Does that person have the moral authority to sit in judgment on others who do, and is the issue properly be subject to the supervision of the Race Officials Committee or is it a club conduct matter.

A keelboat owner with the assistance of an engineer and builder knowing races successfully with an unmeasured and overweight keel bulb?  An Australian Sailing accredited senior coach is found guilty of violent sexual offenses against minors but not those they coach?

A person makes a complaint against a senior officer of a National Member Authority and is threatened with referral to the Board of NMA for the imposition of a life ban independent of RRS 69 or any National Sports Tribunal procedure?

The issue is further confused by the application of so-called “Member Protection Policies” adopted by affiliated clubs and now it seems administered through Australian Sailing and the National Sports Tribunal in Australia.

This process is currently being used to prosecute conduct which cannot be the subject of RRS 69 because the respondent to the complaint is not a competitor at a relevant event.

The role of the National Sports Tribunal is presently uncertain in respect to the World Sailing disciplinary regime so far as it applies in Australia.

In short, there must be better guidance from Australian Sailing as to when it is appropriate to invoke the World Sailing Disciplinary Regime as opposed to an affiliated club’s conduct rules or indeed member protection policies where breach leads to the National Sports Tribunal.

It cannot be the case that you can keep shopping for a forum in search of the result you want.

It is understood that Mr. Jones who is one of Australia’s most experienced and respected race officials and judges has resigned from all positions with Australian Sailing.

There is a thread.

the next sydney to hobart winner?

how cold isn’t it?