Gotta say, this is a pretty cool part of what IMOCa is all about… 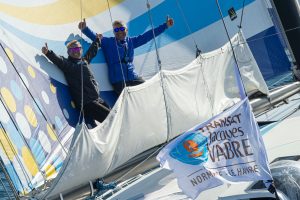 The IMOCA Class has always welcomed male and female competitors, whether it be in the single-handed classics like the Vendée Globe and the Route du Rhum or double-handed races like the upcoming Transat Jacques Vabre.

Last year’s Vendée Globe saw a record six female skippers on the start line and this Transat Jacques Vabre also features a strong contingent of top-class female sailors. They are part of a record number of mixed male and female crews in the race, with no less than five of these pairings in the IMOCA division.

The tradition of mixed crews in the Transat Jacques Vabre goes all the way back to 1999 when Catherine Chabaud and Luc Bartissol took part, alongside Ellen MacArthur and Yves Parlier. In the years since, IMOCA has consistently demonstrated that men and women can compete at the very top in short-handed offshore racing on an equal footing.

In this race the mixed crews are led by podium contenders Simon Fisher and Justine Mettraux on 11th Hour Racing Alaka’i. Alongside them on the start line will be Sam Davies and Nicolas Lunven on Initiatives Coeur, Isabelle Joschke and Fabien Delahaye on MACSF, Manuel Cousin and Alexia Barrier on Groupe SÉTIN-4MyPlanet and Louis Duc and Marie Tabarly on Kostum-Lantana Paysage. More here.

no weed for you, coastie!