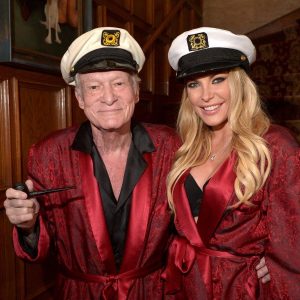 This is your captain speaking. At ease.

It has come to my attention that there was a certain amount of disrespectful behavior during a recent presentation given at the Cripple Creek Sailing & Croquet Club by Monsieur Alphonse Onaniste, skipper of the Clean Green Sustainable One Minute to Midnight Carbon Neutral entry in the next single-handed Vendee Globe Race.

I was, regrettably, unable to attend the talk because of my duties as a judge in the Hugh Hefner Memorial Wet T-Shirt Competition, a role in which I have had the honor to serve since the esteemed publisher and philosopher’s sad passing in 2017. (Heff and I were, of course, great friends and he often donned a captain’s hat in light-hearted tribute to our close relationship – see above).

My beloved partner Tennille was, however, at the sailing club that night and reports the incident in these rather disturbing terms:

Onaniste was interrupted during an initial exposition of his boat’s environmental virtues by an unmannerly interjection from the bar. “Hey fella, your whole damn yacht is made of carbon. Doesn’t that take huge amounts of energy to produce?”

The solo sailor from France was not perturbed. “Not at all, mon ami! My hull is made of entirely recycled material. You will have noticed that the Formula One racing cars are also made of carbon. They crash a lot. My compatriots at the Renault F1 team have kindly been collecting those remnants for the past few years and the pieces of shattered carbon were stuck together to form the hull. Magnifique, n’est ce pas?

But another drunk at the back of the room wanted to make his point. “Listen, Frenchy. You reckon you’re gonna sail around the world without a fossil fuel-burning engine. What about power? Where are you going to get the volts to run your navigation gear, radio, lights and all that stuff?”

“Merci beaucoup. I’m glad you asked”, said Onaniste, warming to his task. “All my working sails are actually made of flexible solar panels. With a low sun on the beam during the first and last few hours of every day, sufficient solar energy will be gathered for my needs.

“That will, obviously, require me to sail either directly North or South during those periods. The course of the race is mainly East-West but I’m sure you’ll agree that is a minor detail in the fight against global warming.”

Finally, Tennille herself had the courage to ask a question. “What about cooking? If you’re not using anything with a carbon footprint, what will be your source of heat?”

“Indeed, I happen to have the device with me. Voila! Allow me to demonstrate the whole process!” As he lowered his trousers, Tennille (being of a refined and sensitive nature), made her excuses and left.

yellow is the new orange